The mood on the Mid-Levels Escalator this morning is one of mildly restrained smirking, as Hong Kong’s disfranchised, tax-paying middle class glides down to the heart of Asia’s leading international financial hub while enjoying the priceless looks on the faces of Thomas and Raymond Kwok of Sun Hung Kai Properties. The usually semi-active, 1,200-strong Independent Commission Against Corruption yesterday arrested the billionaire brothers, along with former Chief Secretary and ultimate Friend-of-Donald insider Rafael Hui. Could it be that Chief Executive-elect CY Leung is already launching a ‘white-terror’ purge against Hong Kong’s parasitical tycoons?

It is a tantalizing prospect. “Wasn’t it Franklin D Roosevelt,” I ask my neighbours, “who said that if something happens in politics, you can be sure it didn’t happen by accident?” (Or LBJ?) But cooler heads among us think not.

Mr Chan the banker points out the newspaper report saying the investigation dates back over a year. Mrs Wong the marketing manager wonders whether the whole thing is a storm in teacup. “Three months free rent is a pretty pathetic bribe,” she sniffs. That said, the South China Morning Post mumbles about something bigger, involving alleged land deal irregularities and HK$100 million in some form or other. Not just a luxury yacht ride. Could the born-again Christian Thomas – founder of the creationist Noah’s Ark at Ma Wan – be breakfasting on Correctional Services Department congee for a few years at least?

On the 20th floor of S-Meg Tower, the three Stanleys in the mailroom are pooling their savings to buy one board lot of Sun Hung Kai shares, which they think will bounce back after dipping. Otherwise, it is just another morning in the private office. The sofa in the reception area is at its usual weird angle, to deflect the bad feng shui influences that seep out of the stairwell. The antique three-legged brass ding sits as always in the corner; inside it are the equally ancient Hong Kong Telecom plastic telephone and gossip magazines that have been there for years.

A chime announces the arrival of the elevator. Ms Fang the hunter-killer secretary looks up from her desk. She seems irritated; there is nothing in the Big Boss’s diary, so who could it be? She waits for it to open, but nothing happens. All is silent. And then, with an almighty crash, the lift door explodes outwards onto the carpet, and a dozen burly men in suits and dark glasses stream out and towards us, waving ID cards and shrieking “ICAC!”

“Where is he – the Chairman of S-Meg Holdings?” one of them demands. A petrified Stanley from the mailroom points to the Big Boss’s office. Within seconds, our visionary leader is being dragged roughly from his lair, handcuffed and marched away, asking angrily whether the government thugs know who he is. An officer triumphantly emerges from the storeroom carrying incriminating documents and a never-worn Henry Tang ‘We are Tomorrow’ T-shirt. The spineless Ms Fang quietly hums The Nightsoil Collectors are Coming Down the Mountain to play safe.  Peering through a curtain across Central, I see a SWAT team abseiling from the roof of the Cheung Kong Center, bursting through the windows of the penthouse suite. And on the street below, a group of bedraggled chief executives from our city’s leading conglomerates are being lined up and forced to kneel on broken glass. A minute later, I can make out the Big Boss being shoved alongside them at bayonet-point. They are making him wear a dunce’s cap. 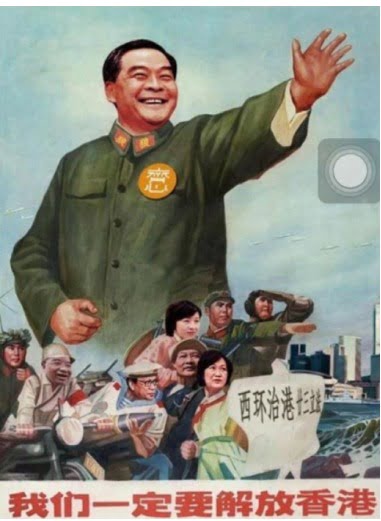 23 Responses to Update from Hemlock