At the urging of Beijing officials, we can be sure, Chief Executive-elect CY Leung holds high-profile meetings with members of the business community who backed dimwit rival Henry Tang. The Standard dutifully invites us to believe that he is mending ties with the (mainly non-property) tycoons; the South China Morning Post says the great Hong Kong public is not convinced that everything is sweetness and light between the once-smug establishment ‘elite’ and interloper Comrade Wolf-Man. Public opinion, needless to say, is spot on.

We can tell that CY and the Anthony Wu/Friends of Donald Shoe-shiners Federation still heartily detest each other because they come out of the sessions claiming to have been discussing the Closer Economic Partnership Arrangement and China’s 12th Five-Year Plan. When did you last have a conversation with anyone about these vacuous non-topics? CEPA and the Five-Year Plan are empty decorations people can stand around and pretend to admire to avoid mentioning anything of substance.

If CY and Tang’s supporters genuinely blathered away about the ‘opportunities’ arising from these PR gimmicks masquerading as economic structures, it would have been a ritualized exchange amid awkward gritting of teeth. If they in fact discussed other things, the atmosphere can only have been colder: one wounded victor superficially offering reconciliation and a bunch of resentful losers wondering what form of punishment awaits them for shoe-shining the wrong guy.

The historic gap between the self-appointed establishment clique and the quiet, skeptical outsider-loner would be hard enough to bridge under any circumstances. The tycoons have long known that CY is on to them; they know he feels they are not productive wealth-creators but bureaucrat-linked parasites who harm the economy and society. But the mutual detestation is all the greater because these same people mounted a desperate smear campaign in an effort to bring him down with maximum prejudice in February-March after it became clear that their Henry had crashed. He knows they did. They know he knows they did.

The smear campaign at least partly worked. CY went from a 63.9% public approval rating when Henry’s basement hit the headlines to a 35% one as the quasi-election day neared. Henry’s marital problems and illegal structure are real, as were CE Donald Tsang’s luxury jet and yacht trips. CY’s supposed triad links, on the other hand, are nothing more than a fabrication; his conflict of interest over West Kowloon seems to be circumstantial, not to say mind-numbingly trivial and tedious; the alleged comments about tear gas, like Communist Party membership, sound relatively credible but are completely impossible to verify – and not too scary these days to the famously pragmatic core of the population. Yet most overseas press reports cast CY and Henry as more or less equally tarnished. And every local columnist stresses how he will take office with his credibility and thus ability to perform damaged.

He could have tried harder to defend himself from the establishment’s mud-slinging but maybe calculated that turning the other cheek would impress the Beijing officials who would decide the outcome and were rapidly losing all hope in Henry and his buddies. To the extent he has a mountain to climb or whatever, it might not be a bad thing. Anecdotal evidence suggests that while panicky pan-democrats and equally nervous establishment figures fear what’s coming, there is a sizable middle ground out there hoping CY will, as someone once said, get the job done. The tycoons’ smears have left him with little option but to do that. Forget Article 23 or making kids sing The East Is Red – he will have to prove himself quickly with decisive, people-first measures. Anthony Wu and the rest will just have to shut up and applaud. 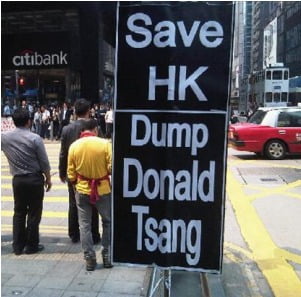 Click to hear ‘See My Friends’ by the Kinks!

12 Responses to CY and tycoons best of pals, really