One last hope for the petrified

The earnest and trendy crowd photographed at Hong Kong’s new White Cube gallery last Thursday seemed to confirm the city’s new role as Third Biggest Art Hub in the Solar System. But when I dropped by at noon on Saturday to see Gilbert and George’s London Pictures, I was alone in the 4,000-sq ft, two-floor showroom, apart from three staff. So I managed to buy the last signed print… 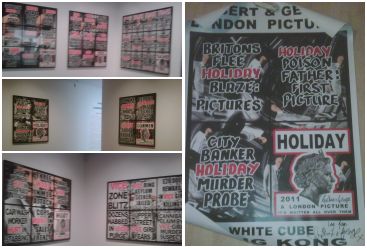 While filing it away along with other unframed posters, I came across a lime green one from five years ago bearing Donald Tsang’s Chief Executive campaign slogan

about getting the job done. It was number 400 in a series of 1,000 (to comply with election rules) and was stolen from the wall outside the men’s room in a Lan Kwai Fong bar.

It was of course one of landlord Allan Zeman’s hostelries. This time round, Zeman is once again supporting the choice of Hong Kong’s developer-bureaucrat establishment. But, even before taking office, Henry Tang has managed to make himself as despised as Donald has become after working hard at it for years. Henry, Zeman tells the South China Morning Post, must make himself more popular. That’s one way of putting it: the clueless spoilt rich-kid candidate managed to get just 2% of the 500-strong audience to back him at a (predictably hostile environmental) debate over the weekend.

A (non-fact-checked) NPR report on the Big Lychee’s gloriously disastrous rigged election ends with a neat summary: “Beijing … will have to choose between alienating the ordinary people of Hong Kong or its tycoons.” The plutocrats, or at least a veritable smattering of them, are currently in the nation’s capital for the CPPCC/NPC sessions, and we can be sure that they will be testing to the limit the widely held assumption that they have Beijing’s ear. They will plead that Henry’s rival, CY Leung, poses a major risk to the continued success of the Hong Kong economy. CY, they will insist, is a dangerous, socialist, welfarist populist. His high public approval ratings should serve as a warning.

We might think such talk is self-serving, but these tycoons will be totally sincere. They do not see CY as a threat to their own local businesses in isolation but to the whole capitalist system in Hong Kong – the wholesome, positive, wealth-creating good bits as well as the parasitic, semi-feudal bad bits. Furthermore, if some random recent conversations and eavesdropping are anything to go by, they are not alone.

Some of Hong Kong’s smaller potatoes – from property owners, to civil servants, to entrepreneurs, to civil rights folk – are trying to envision CY Leung delivering an annual policy address in the Legislative Council, giving New Year’s greetings to fellow citizens on TV or chairing an Executive Council meeting. And it is giving them a jolt. Maybe they account for that 2% at the debate. Nice idea in theory to have a new broom and fresh ideas, but… him? Surely better in practice to stick with what we know.

The problem is that ‘what we know’ is a buffoon who has so far machine-gunned himself in one foot, then the other, then back to the first one again. As Allan Zeman says of Henry, “…he has the ability, but he lacks the credibility.” By ‘ability’, of course, he means the capacity to smile and nod and do what your bureaucrat/tycoon minders tell you.

Maybe the Xi Jinping Handshake is the sublime signal that Henry has lost the mandate of Beijing, or a warning that it could happen. Or just a handshake. But if the Central government would still prefer to appoint him provided he narrows that embarrassing gap in the opinion polls, it can be done.

Scare stories about CY aren’t enough. Nor are cute gimmicks like the ‘thank you note’ supposedly from a grateful senior citizen. Henry needs to steal CY’s clothing and announce that he has seen the light, and his administration will be a ‘people first’ one, with fewer favours (whatever that means) for the tycoons and some named, manageable and probably overdue boosts in social spending. And at some point he should say he would appoint CY Leung as his number-two with special responsibility for sorting out health, education, welfare and housing (without getting anywhere near the financial and economic levers). And CY, the obedient party loyalist, would gracefully lose the ‘election’ and pretend to like his new job. Hong Kong’s collision with populism is averted. And everyone would be one big happy family again, as Beijing so badly wants it to be after the recent warfare within in its local support base. They’ve got 20 days.

21 Responses to One last hope for the petrified