First, the Tiberius approach. The Roman emperor tried to ban silk in the AD30s because its importation was depleting the empire’s reserves of wealth; the Han Dynasty in China required payment in the form of gold – which it hoarded – and refused to accept other goods in exchange.

Tiberius didn’t know anything about the Seres, or silk people; he didn’t even know where China was. Indeed, Romans thought silk was the wool of a sea-dwelling sheep. And it is unlikely that the Chinese noticed the Romans’ limp attempt at economic sanctions.  Result: nothing happened, and the Chinese carried on, oblivious to foreigners’ concerns.

Second, there is what we might call the Palmerston approach. In the early 19th Century, Indian-based British merchants buying silk, tea and chinaware for export to the UK faced a similar problem. The Chinese authorities banned importation of most foreign goods and demanded that barbarian traders pay for Chinese products in silver. Again, the metal was simply hoarded. It started to grow scarce, so the merchants found another commodity that was as valuable and easy to transport: opium. The Chinese government objected, and tried to stamp the traffic out by confiscating the merchants’ supplies.

One difference is that China today is far more integrated into the world economy. The whole country depends on imports of raw materials, energy, technology and plain everyday food, mostly from places other than the US. They pay for it not by selling pleasant, smooth, highly desirable silk, but by exporting cheap, indeed often worthless and unnecessary, manufactured junk, notably to the US. To help the process, they force their low-paid factory staff to subsidize fat Western consumers – the net effect of a weak, pegged currency reducing a population’s purchasing power. Now the Americans are basically demanding a competitive devaluation of the dollar, to make their own people poorer. A stronger Renminbi equals higher demand for imports among Chinese consumers, equals US$5-a-gallon gas in the US.

The Renminbi will rise in its own good time; it seems such a safe bet that many of us in Hong Kong take advantage of our privileged access to 20,000 Yuan a day to accumulate RMB savings as a sort of fingers-crossed, probably-high-yield time deposit. But in the short term, Obama will follow a route closer to Tiberius than Palmerston, whatever labour unions, xenophobes, Nobel prize-winning economists and congressmen might want. A big trade fight might teach [insert name of whoever you don’t like] a lesson, but the world simply isn’t that exciting. Look at Greece – I’ve given up waiting for that country to drop out of the Eurozone, let alone for the common currency to blow apart. They’re going to find a disappointingly dull way to muddle through. I just know it. Euro-Armageddon would be great, but life’s just not that interesting.

Except maybe this, in today’s South China Morning Post: 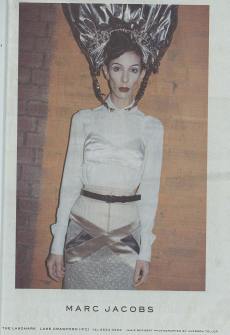 How is this supposed to influence a consumer’s behaviour?  The small print says: “Jamie Bochert photographed by Juergen Teller.” Never heard of either of them. The ad is for a certain Marc Jacobs. Never heard of him/it. I have no clue what this is an ad for. All I can be sure of is that I don’t want one.

Oh, and that it’s made in China.

4 Responses to Currency crises loom, nothing interesting to result