A primary school like no other in Hong Kong

That’s the claim made by Lantau International School, not least because of its unique location: scenic south Lantau. The lower school is in Tong Fuk, and the upper in Pui O – both villages with beaches, no less.  How’s this for a school photo? 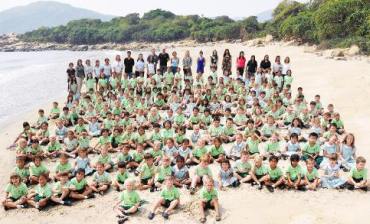 Click on the picture to hear kids playing at 62dB, courtesy of Amadou & Mariam!

LIS now has another distinction.  It seems it has become the first school in the whole of Hong Kong to be served with a noise abatement notice by the Environmental Protection Department on account of the sound of its kids.

This happened soon after the growing school finally opened new premises in a renovated, derelict hotel at Pui O last month.  That project – you can see this coming a mile off – faced peevish opposition on the part of certain sons of the local soil.* EPD inspectors turned up and positioned their microphone right outside. Apparently, they waited for some time before recording any noise, but sure enough, lunchtime came around, the children came out and the valiant EPD officials registered 62 decibels.

Which surely makes LIS students the quietest kids in the Big Lychee. However, the EPD take their job seriously – why else do you think Hong Kong is such a calm, almost silent place? – and slapped the school with the abatement notice for exceeding the 60dB limit in ‘village type development’ (the same level that applies to country parks). A public primary school 200 metres away was not measured; no doubt the children there are studying quietly for their exams rather than running around uncontrolled to no purpose.

Like much noticeable EDP activity, noise abatement notices are rare; perhaps it helps if a New Territories village chief makes the complaint. The usual fine for failure to comply tends to be roughly in the HK$15,000-20,000 range. That’s a lot when you’re nine.

* I have only heard one side of the story. It could be that this latest outbreak of strife in the ethnic-cleansing, inter-tribal mayhem that is local politics in southern Lantau is the result of an unpardonable crime by evil, exploitative, grasping, mainly Western settlers against innocent, downtrodden, disadvantaged indigenous residents, with whom a noble and righteous Environmental Protection Department has gallantly sided.  Could be.