The Mainland-extradition amendments get a frosty reception from pro-democrats in Hong Kong’s Legislative Council. Anticipating this, the government has painstakingly crafted various exquisite lines-to-take.

One is the claim that since oh-so-classy, fancy-sounding countries like France have extradition agreements with China, there’s no reason why Hong Kong shouldn’t. (And Finland!) Opponents respond that it is hard to imagine Chief Executive Carrie Lam and her kowtowing eunuchs viewing an extradition request from Beijing with the same impartial or skeptical eye Europeans might have. Officials trump that with their Ace: Hong Kong’s courts will also act as a safeguard.

As the HK Bar Association and others point out, the extradition proposal actually limits judicial oversight (assuming, as a commenter here mentioned, you can afford it). But more generally in recent years, critics accuse Beijing and its local administration of weakening judicial independence. This has clearly happened through ‘interpretation’ of the Basic Law. There are also suspicions that magistrates and judges are under growing pressure to deliver the ‘correct’ rulings. 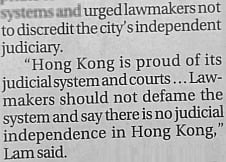 In an effort to nip this sensitive suggestion in the bud, Carrie and Co draw on a half-way clever line, accusing its proponents of bad-mouthing or disrespecting our fine upstanding judiciary. The word yesterday was ‘defame’. How dare you nasty rude pro-democrats throw horrible insults at these wonderful and noble, highly trained, utterly Independent judges, many of whom are whiter-than-white (for want of a better phrase) foreigners, and who are so crucial to maintaining Hong Kong as a global world-city business hub-zone?

Officials have resorted to this angle before (when critics accused the courts of bending the government’s way in chasing Umbrella Movement activists). A similar line is that, by suggesting the judges are biased, you are yourself damaging our rule of law, you vile beast. It’s lame, but, combined with faux-outrage, superficially convincing enough for a busy audience with no time for nuances.

I declare this long (Ching Ming) weekend open with a few worthwhile links. From Vanity Fair (really), the disappearance of pale-skinned, doe-eyed, almond-faced (OK, mutant) tax-dodging actress Fan Bingbing. The News Lens examines how the Kuomintang transformed itself from the sworn eternal enemy of ‘Communist bandits’ to Taiwan’s pro-Beijing shoe-shiners. (‘The party has apparently reached the conclusion that the “one China” objective matters more than opposition to the CCP.’) And to bring a ray of sunshine into our lives, an updated lovingly curated collection on loan from the Hermitage of Hong Kong shutter art – which is taking over where the old neon left off.

I will be on an official inspection-visit duties in Malaysia until Thursday.