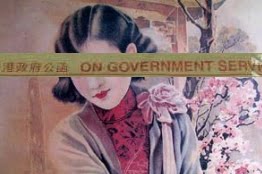 Hello! He has had so many people asking what I am doing these days, so here goes! You will remember back in those dark days following SARS, when I was put in charge of the anti-nose-picking campaign, and it was actually a great success. As you can see from the above-captioned job title, my career has been going very well since then. Competition to be at this civil-service rank is fierce (extra air-conditioning allowance, but the danger is that if you get promoted just one more grade, you might be picked to be a government minister).

People think Home Affairs is mainly about selecting suitable Youth Say No to Drugs and Sex Ambassadors, making sure museums aren’t so interesting that they are overcrowded, and organizing the annual Let’s Be Nice to Ethnic Minorities Day. Which is true! But we have even more important things to do. For example, the Bureau has a vital role to play in promoting Greater Bay Area integration, which is my own area of responsibility.

A quick run-down of my recent duties might give you an idea of my multi-pronged work.

A month ago, I spent a Sunday monitoring the number of Mainland visitors coming across the Zhuhai-Macau-Hong Kong Mega-Bridge into Tung Chung. I noted that the number of tourists was so great that local residents were finding it impossible to go shopping or get into a restaurant, and waiting times for public transport were five times longer than usual.

I subsequently sent my report to my boss, with the usual copy going to nice Mr Zhang – who was previously in Urumqi – at the Xianggang demographic rectification strategy working group at the Liaison Office.

Last week, in a circular to all Bureaus, Mr Zhang acknowledged quarterly key indicators he received on Mainland tourist arrivals (static), air pollution levels (down slightly), housing prices (down slightly), and primary-student suicides (static). We must try harder, he says.

He also says his personal inspections showed that the air has been fairly clean recently, and that a couple of MTR journeys he took were not especially crowded and the service was quick and pleasant. In response to this, our Transport Department colleagues have just agreed to continue ensuring serious traffic congestion at key chokepoints for several more years, and they will ‘resolutely, actively and consciously’ step up deterioration of MTR operations.

For my part, my Bureau has become more concerned that the burden of Mainland visitors is too concentrated on Tung Chung alone. My staff are now making arrangements to ensure that Central, Shamshuipo, North Point and several other densely developed districts also receive more tour groups. Initial informal feedback from the public is encouraging .

On Wednesday, I helped draft speaking points for businessmen, pro-government lawmakers and other members of the Association of Patriotic Greater Bay Area Friendship Organizations. The key message is that young Hong Kong people should move to the Mainland for affordable housing, more space and Belt and Road Opportunities.

This week, my staff and several other departments are liaising with Mainland counterparts to import several thousand gene-edited diseased rats for release in some 50 locations in Hong Kong’s urban areas. After coordination with the Food and Environmental Hygiene Department, we have arranged for street cleaners to wash rodent poison away as soon as it is laid in infested areas. This looks promising.

Well, I must go now! Mr Zhang has called an inter-departmental meeting to congratulate everyone for getting Hong Kong’s birth-rate down to 1.2 per woman, because there’s no space for kids, therefore we must have more Mainland immigrants, you understand.

Just another busy month waiting to collect my pension dedicated to serving the communis… community!