A mildly amusing but telling moment in Mainlandization today.

Hong Kong’s Liberal Party – which despite its name represents entitled hereditary business owners in parasite/cartelized industries – was going to propose a motion in the Legislative Council calling on the government to introduce national security laws. 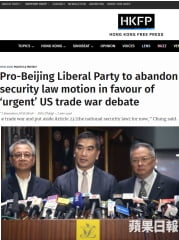 This would be a pretty standard, not to say unimaginative, way to shoe-shine Beijing. These guys all have interests in the Mainland as well as Hong Kong, and the gesture would be timely, given that the more ideologically devout pro-Communist lawmakers have already made similar statements following the recent pro-independence scares in the city. In short: the Liberals felt that a precautionary unseemly rush to kowtow was in order.

But it then occurs to them that this Mainlandization stuff is going down badly overseas, not only among media and NGOs, but some corporations and US politicians and trade officials. Western governments are hinting that they might withdraw Hong Kong’s separate and privileged economic status if Beijing curbs the city’s freedoms – a threat that is probably (for the time being) hollow but petrifies local officials and some local businesses, no doubt including their own.

So the Liberal Party legislators hurriedly drop the motion. It’s hard to be loyal with so many different things going on. Do they grovel to the Communists by demanding local anti-sedition laws, or do they display concern for the national interest by not provoking evil hostile foreign forces – and, for ultimate torment, without having time or space to fully factor in their own grubby financial interests either way?

A little reminder that the tycoons will also sweat as Mainlandization continues.