It’s all over here today… 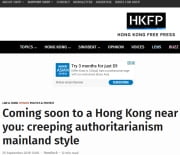 11 Responses to Over at HKFP