And this month’s winners are…

Rimsky complained that the city’s international reputation for rule of law is deteriorating. Coming from the government’s former top legal official under pro-Communist CY Leung, this takes nerve. At the same time, Antony Leung moaned that there is too much emphasis

on ‘one country’ rather than on ‘two systems’ – in the manner of an aging pan-democrat who hasn’t noticed we are part of a Leninist dictatorship.

They compounded this breathtaking impudence by making the remarks at a low-end pro-Beijing businessmen’s gathering, surrounded by CCP shoe-shiners, United Front stooges and Belt-and-Road worshipers. For an event where you would be applauded for demanding severe punishment for localists and glorifying Hong Kong’s ‘integration’ with the Mainland, they were off-message. Is this a slight sign of establishment concern about the accelerating decline of Hong Kong’s freedoms and identity – or are the two getting rusty in learning the official lines?

I declare the weekend open with some (mainly cross-strait) links.

No surprise, but guaranteed to infuriate all the right people: Hong Kong youngsters support Taiwan independence. Journalists and others who ponder such things and confuse ‘reunification’ with ‘annexation’ will welcome this useful little Thesaurus of Beijing’s Taiwan Vocabulary.

The same author presents Taiwan is 98% Han Chinese (the title is tongue-in-cheek): a short and fascinating series of factoids on the multicultural (eg Hindu, Mongol) nature of coastal Fujian not long before folks there started poking around Taiwan. This is not the official Beijing history. And on that subject, next time you’re over the border, check out the Opening and Reform Museum in Shenzhen, which has had a makeover – quicker than you can say ‘Pre-emptive Shoe-shine’, Deng Xiaoping has been shunted into the corner, and Xi Jinping and his illustrious dad (see also here) become the focus.

And if you’re in New York next month… 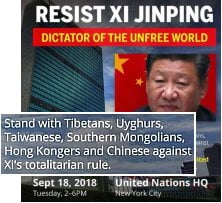