An overload of weekend reading…

As curbs on speech and other freedoms loom after the Andy Chan/FCC lunch, an interesting question: What cost should Hong Kong pay to make Xi feel safe? The article goes on to say:

“…it seems impossible for [Beijing officials] to stomach the assertion that the event was meant merely for journalists to neutrally understand a political agenda, rather than lending it support and giving it publicity.”

“The final bulwark lies in the Hong Kong government.”

I declare the weekend, and a backlog of reading, open with this handy cut-out-and-keep Hong Kong News Bingo (which comes with a special Sedition Edition for use in the months and years ahead)… 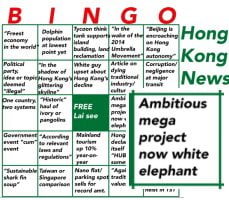 And the first box we tick is the White Elephant one. Have they fixed the leaking basement and the drifting concrete block things with bits sticking out? Has it opened yet? Will we notice when it does? A preview (coincidentally from the bingo-compiler) of the mega-expensive Hong Kong-Zhuhai bridge – a technological marvel designed for symbolic-ex-colony-absorption, not driving across.

Also in the not-what-it-seems department: another Deep Throat IPO dig into Alibaba and numbers that don’t add up from the latest financial results . Even if you skip the jargon, read the summaries for such insights as:

“Consolidating money-losing-dog-shit businesses using all sorts of valuation shenanigans to hide what’s happening, and/or bailing out friends with US Shareholder Money seems to have consumed much of management’s time and resources.”

Haven’t heard from Bill Overholt for a while. Here he efficiently puts Xi Jinping’s leadership in perspective as indecisive, insecure and unable to make the transition from authoritarianism to a more complex economic and social system. (Apparently, this is big news to some people.)

From Foreign Policy, more on mighty Xi-ism not working as advertised. (A relief, given the incredible CIA incompetence that allowed China to wipe out a whole mainland spy network, with max prejudice). And on to yet more grumbling from a Mainland intellectual.

The CCP International Liaison Department carries on regardless – spreading influence through a new Comintern. If they get their hooks into you, maybe you’d like to do a master’s degree in Xi Thought, a hot research topic in China’s universities.

On a slightly more rigorous academic note, Kaiser Kuo takes a look at China’s 5,000-years-of-history cliché. (The article ends with the point that the Chinese writing system is indeed ancient – though if we were to be brutal we could ask in a shocked and pitying tone: ‘You people still using rebus/hieroglyphs after 4,000 years???’)

Also for fans of antiquity and/or Sino-Western misunderstanding: the tale of friction between a French Christian missionary and the Kangxi Emperor over ancestor-worship. And for a softer, indeed squishy, story of cultural exchange: the woman who introduced tofu to America.

4 Responses to An overload of weekend reading…