CCP to get more piqued 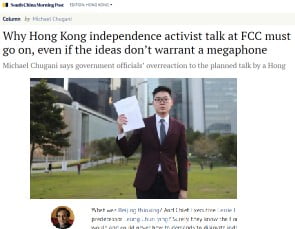 Beijing’s attempt to halt pro-independence activist Andy Chan’s forthcoming talk at the Foreign Correspondents Club is turning into a more glorious mess that anyone dared expect.

A South China Morning Post columnist breaks with the party line apparently out of exasperation, criticizing Beijing for exaggerating the Hong Kong National Party as a threat, and for giving ammunition to China-bashers who can now highlight the Communist Party’s attacks on free speech.

It would probably be more accurate to say that this unfolding saga will highlight the fact that the Communist Party doesn’t give a damn about its reputation and is psychotic in its determination to crush any opposition.

Ever since Xi Jinping took over, China has been chipping away methodically at Hong Kong’s autonomy and freedoms. This is the first time the hammer and chisel have bounced back in the Party’s face.

It will not be gracious about it. The FCC lunch will no doubt take place unimpeded by rented mobs or overzealous cops – Beijing’s officials aren’t that dumb, we more or less assume. But eradicating pro-independence ideas will become an even more urgent priority, calling for even less subtlety and charm.

And where are Chief Executive Carrie Lam and her administration in all this? Hiding in the corner looking petrified, hoping we don’t notice the idiocy of their position – supposedly representing Asia’s World City as a modern and free society while not contradicting their masters’ Leninist ravings and dismantling of rights.

3 Responses to CCP to get more piqued