Readers of the Standard opening page 8 this morning experience a sudden bout of air-motion discomfort as a ghoulish apparition peers up at them. The Morticia Addams lookalike hungrily eying Donald Tsang is in fact lawmaker Regina Ip, who tells reporters that the disgraced ex-Chief Executive is suffering ‘post-public office syndrome’.

Senior civil servants earning only a few million a year socialize with the city’s plutocrats in elite hangouts like the Jockey Club. The exclusive surroundings and trappings might suggest they are social equals, and indeed they are on first-name terms. But the relationship is far from symmetrical. The bureaucrats have risen through a meritocracy and believe they are the cream of Hong Kong. The businessmen are dim and were just born into extreme, cartel-owning wealth. The civil servants feel like paupers in comparison, but they have discretionary administrative and regulatory power. You can imagine the rest.

Poor Rafael Hui was a victim. Many others probably are, but we never find out (though we can be sure Beijing knows, and finds such information most useful in keeping senior officials loyal).

Just as bureaucrats are mesmerized by tycoons’ riches, the business class covets the intellectuals’ academic and professional credentials. Embarrassingly, the lesser magnates envy the big boys’ fake doctorates (from real donation-hungry universities), and must acquire phony fake ones – and it all gets rather icky.

Horrified Standard readers flicking back from the Regina-Donald story will come across a classic example (page 6-7 on today’s ‘flipping version’ here, if you must). 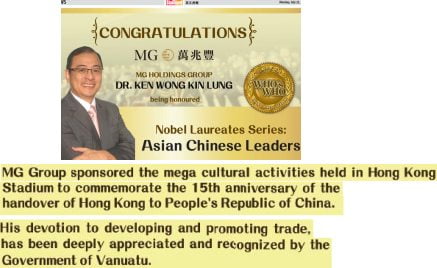 We’ve been here before. The ‘Nobel Laureates’ thing and the related Asian College of Knowledge etc have a strong whiff of United Front permeating the stench of shoe-shining. Not to mention, of course, bullshit – as Mr Webb already revealed in an expose of ‘Lincoln University’ and various fake professional institutes mentioned in all this.

Looking at the link on the 2017 awards ceremony, it seems presenters included a real Nobel Laureate and a top Hong Kong official, Health Secretary Sophia Chan. And sponsors of the announcement in the Standard include oh-so reputable companies like Hang Seng Bank and Prudential. The inter-oozing of business and bureaucracy continues.

Tragically, the world of Hong Kong establishment-wannabe social-climbing title-accumulation has still not produced anyone to rival Duke Dr Raymond Lee.