Hong Kong reels in shock after economist Leo Goodstadt’s new book reveals that the city has been governed with unimaginably extreme ineptitude since the handover to the motherland.

The one-time policy advisor to the old colonial regime would probably not claim everything was perfect pre-1997 (his previous works do not). But he believes that, by any standards, all four administrations under Chinese rule are guilty of gross mismanagement. One reviewer thinks he might be over-doing it a bit. 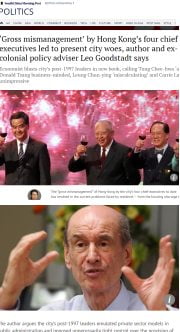 Probably shouldn’t comment without reading it, but obviously I will…

Goodstadt apparently maintains that the Basic Law mandates Chief Executives to attend to local people’s welfare, and things would have been better if post-97 governments had followed this. It’s certainly true that all four CEs have had a simplistic, blinkered or clumsy idea of keeping the city ‘good for business’ – letting property interests rip off the rest of the economy while government itself sucks more wealth out through massive budget surpluses. And it’s true that they and their bureaucracies all shared a peculiar dread of future economic calamity and a phobia about social spending.

But blaming these four mediocrities (and recall near-miss Henry Tang who made the others look smart) may be beside the point.

The Chinese Communist Party chose each one of them. Despite what establishment toadies like to say, there is no shortage of suitable talent in Hong Kong. Beijing picks dullards on purpose. It doesn’t trust anyone with ideas of their own. A suspicious mind might also imagine that the CCP is not unhappy to see the city stagnate to a degree (like it punished foreigner-friendly capitalist Shanghai after 1949). Either way, the mismanagement is not some four-hapless-incompetents-in-a-row misfortune or an accident.

Which brings us neatly to some summer reading: Suzanne Pepper at HKFP on that strange new official wisdom in Hong Kong where if you say rule of law is declining you are causing it; and a reminder as Mainlandization moves on to banning groups for their opinions, that Taiwan is watching.

Not content with infiltrating New Zealand and Australia, the CCP’s United Front moves in on the USA. And a rant about the ‘narcissistic self-absorption’ of Panda-pandering overseas academics who overlook China’s human-rights horrors (why can’t they just kowtow for the money like everyone else?)

We end on a cheerful note, with Anne Stevenson-Yang on how the whole Chinese economy is a Ponzi scheme.

I declare the weekend open with a long-overdue return to Wondermark (here’s a sample for the uninitiated – it’s not for everyone). 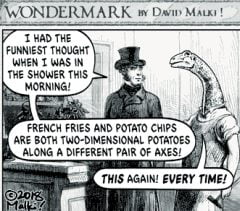