‘They help us compete with other bay areas’

It’s all relative. Malaysian leader Najib Razak was so bad that the country is celebrating the return of 92-year-old dissent-crushing, courts-rigging, rival-framing Mahathir Mohamad as a victory for fresh, clean, decent governance. And by the standards of the Philippines, Thailand, Burma and the rest of Southeast Asia, if you aggregate out sleaze, despotism, carnage and basic administrative incompetence, Najib’s leadership scored no worse than maybe a 5.

While Malaysians wait for the truth about whether Najib pocketed US$600mn/700mn/ whatever from the national development fund, Hongkongers wonder what they will get for the money they poured into the Zhuhai Bridge and High-Speed Rail white elephants. A quick back-of-envelope calculation suggests the two projects will set us back a good US$15 billion-plus-plus in construction, plus the ongoing running costs and maintenance.

The recent inspection tour of Macau yielded hazy views of the Giant Concrete Worm from Hell in the distance from the ferry windows. You can also see a huge border-crossing/parking complex taking shape on reclamation northeast of the Macau ferry terminal. The completion date is too uninteresting to look up, and subject to technical-bizarreness delays, but close enough for the bureaucrats to start inviting media over to do PR-puff stories.

It is still unclear who will actually use the thing. Cross-border private-car permits are scarce and inflexible, so not many people will whizz back and forth in their SUVs. The CNN story quotes some blather about Zhuhai factories’ goods being trucked to Hong Kong for shipping – which all sounds rather 1990s, though maybe Trump’s trade war will result in China importing cheap American T-shirts. That leaves passenger buses linking Zhuhai’s hinterland with Hong Kong. We are told the existence of the bridge will make Zhuhai a really groovy place for us to live, work and play in, but population distribution suggests that in practice it all means packing more Mainland tourists into Hong Kong.

The high-speed rail link looks slightly less pointless in that it can transport you to a far larger number of places that you don’t want to visit/will remain obvious plane routes. From the Chinese Communist Party’s point of view, it at least serves as a precedent for the extension of Beijing law enforcement across the border to the station in Kowloon.

While the bridge suffers from breakwaters sliding around, the supersonic technological rail marvel has insurmountable problems with tickets. Rather than have a customer-friendly seamless one-stop booking system where operators split the revenues behind the scenes, different entities need to individually sell different tickets to particular destinations (except on weekends, when it’s the other way round). This sounds like a Mainland thing, but the Hong Kong side can’t say that, so they must take the blame. I weep. Even if you get a ticket you will have to cut 10cm off your luggage at the border, and people in wheelchairs will need to learn to walk… 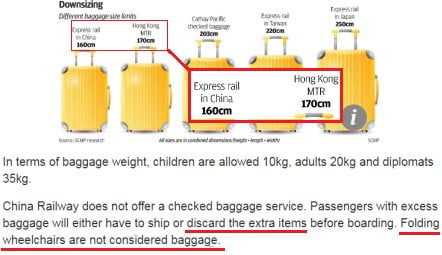 (Update: does “not considered baggage” = “allowed”? A thousand apologies if so.)

3 Responses to ‘They help us compete with other bay areas’