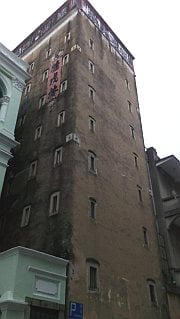 What’s inside this impenetrable and spooky old Macau tower? It is part of a pawn shop business, so I would guess it’s full of vaults, safe-deposit boxes and strong rooms – or was in its glory days. The scale of the building gives you an idea of how many sour-faced misers who didn’t trust banks there used to be in Macau. (The city was the only open gold market for many years, so maybe that’s part of the story.) Probably just dust and cobwebs now. Suitable for renovation as luxury apartments for paranoid recluses.

Thanks for this on the over-hyping-for-mutual-convenience of Sun Yat Sen.

An update of Beijing’s purge against Hong Kong’s pro-democrats – a list that phone-snatcher Ted Hui may soon join. Barred Legislative Council candidate Agnes Chow is filing an election petition, while pro-dems still in office were carried out of the chamber yesterday. If lawmakers are convicted of the bizarre Occupy-related incitement charges, it would be the right time for the whole pro-democrat camp to quit Legco, assuming they could act in unison (and survive off the public payroll).

Remember the guys who found a system to win on the races from a computer-packed apartment overlooking Happy Valley? Bloomberg tracks a survivor down and goes over the whole weird tale.

1 Response to Macau’s other fortress