As Donald Trump’s blundering pushes the world closer to a trade war, Xi Jinping comes to the rescue and nobly opens up China’s economy and embraces a free-market rules-based international order. Alternatively, the devious Communist leader attempts to con the air-head in the White House by spouting stale vague blather about market-opening while doubling down on hyper-nationalist predatory economic policies.

A ‘positive energy’ interpretation comes from Inkstone. This is the Jack Ma/South China Morning Post online vehicle for ‘soft power’ (motto: ‘translating China’ into stuff you Barbarians will like). It’s a bit like state-owned Sixth Tone, including an annoying/trendy website design, but it augments the ‘safe’ quasi-hard-hitting human-interest stories with overtly political coverage. It cheerily concludes the item on Xi’s Boao speech with the speculation that, if China keeps its airy promises, the country will be ‘very different’. 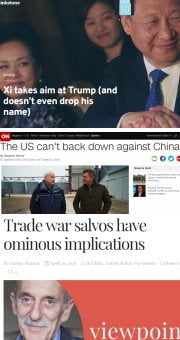 Right down at the opposite, skeptical end of the spectrum, a conservative commentator at CNN describes China as no mere economic rival, but an emerging strategic threat like the USSR once was.

The difference is that, back in the 1950s-70s, Western multinationals and financiers did not drool over babushkas’ spending power or Moscow stock-market listings. However much Beijing kills dissidents, puts Uighurs into camps, grabs others’ territory, starts United Front operations in your back yard – or steals your IP – polite Western society just goes on hugging the Panda. (At least young Hongkongers  – bless them – get it.)

So we go halfway back down the scale to the genteel, moderate middle-ground. Economist George Magnus is no rabid anti-globalist or Cold Warrior; he is a wry commentator particularly known for Financial Times/BBC-worthy panty-wetting about Brexit. His opinion is that China is, indeed, implementing a systematic party-state industrial policy that especially targets AI and other futuristic sectors. He barely touches on how the commercial aspects overlap with dictatorship-entrenchment or rising military clout. That’s left for the uncouth. But he ends by stating that China’s…

Trump is actually the biggest danger – the threat being that his gullibility, ineptness or impeachment let China off the hook.

(Update: See also this on ‘…outsiders fail to grasp how revolutionary it is simply to confront Beijing‘.)

5 Responses to Xi Jinping saves free trade and the world