Maybe they should call it a Task Feebleness

The Hong Kong government’s main effort to solve the city’s housing problem has been the formation of a Task Force on Land Supply. It has had no visible impact on making housing more affordable. Instead, it has discussed drug-induced fantasies like building platforms above container ports and reclaiming reservoirs. Such ramblings confirm that the officials behind the Task Force wish to divert public attention from realistic measures (and insult our intelligence). It is possible they will next try to amuse us with a sliver of a golf course.

A few months back, an idealistic NGO quietly floated a suggestion. They proposed a fully independent body (something like a specialized citizens’ jury) to list and examine all the possible new sources of land for homes. With no vested interests undermining the process, we would at last get an objective view of the options to make housing more affordable. Needless to say, no more was of heard of it. 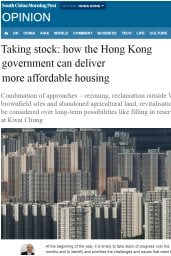 A column in today’s South China Morning Post mildly concedes that the official approach has its limits. It actually calls the port/reservoir inanity a ‘diversion’ and admits that re-zoning brownfield, agricultural and other sites would be more practical. It even starts to hint at extremely obvious and easy solutions, when it states that ‘the government prospered’ last year from auctioning land to developers at wacko prices – but then the Don’t Think Out Of That Box alarms go off.

By seeking maximum land/development revenues for itself (in addition to the developers’ fat margins), the government just pushes housing prices up further. It is a perverse system: rather than acting as an enabler, the state in Hong Kong competes with the rest of the population and economy in a zero-sum struggle for an essential resource. The government actively tries to make it as expensive as possible for people and businesses to access space to live and work. It then acts puzzled when people complain of poor living conditions and limited spending power, or entrepreneurs can’t thrive (or people have illegal structures). And the government has no use of the extra revenue! It could pull the plug on this idiocy tomorrow.

Other ways to make homes cheaper involve tackling the demand side, like barring Mainland money-launderers from buying property here. The list of possibilities is long. Again, the government and its supporters act oblivious to the fact that such options exist.

9 Responses to Maybe they should call it a Task Feebleness