I recently mentioned the Penguin Specials on Hong Kong, which are all listed on Amazon’s page on A System Apart. A review of that book pulls some good quotes about how 20 years after the handover, Hong Hong’s economy…

“…is still dominated by a handful of companies, most of them run by ageing tycoons. No new business has risen up to challenge or replace them. No major new industry has been established.”

“…opening the way for cronyism and corruption and preventing the kind of changes needed that would allow the city to maintain its economic dynamism.” 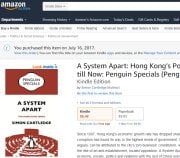 A historical summary: China’s 1980s leaders – with a crude Marxist understanding of a capitalist society – co-opted Hong Kong’s leading business players in the naïve belief that these property/textiles/banking families created the city’s wealth. To reward or keep these ‘various sectors’ onside, Beijing gave them undue influence over the city’s post-1997 government. The result is that our economy is in some ways frozen in the 1980s.

We don’t seem to hear so much about them today, but in the 2000s Hong Kong officials decreed a list of ‘Four Pillar Industries’. (Can you name them all, children?)

The imagery suggests that that they prop up our economy. But it might be more accurate to say they are propped up by our productive economy and long-suffering population.

One is logistics, notably the container port – a facility that London got rid of decades ago because it had better things to do with the space. One is the parasite known as tourism, the hugely subsidized space-hungry displacer of local businesses and source of dead-end jobs. One is financial services, which at least sounds appropriate for a 21st century developed economy, even if it’s probably a bit heavy on the money-laundering side. And the fourth (he checks on Google…) is something called producer and professional services, presumably the marketing/legal/accounting ‘shop front’ for the Mainland manufacturing base that is itself now in decline.

Missing from this is construction, notably of white-elephant infrastructure projects, which (as in the Mainland) boosts short-term GDP and benefits tycoon-linked interests. Also property, which is not an industry (just the buying/selling/renting of concrete boxes) – but it is a giant vacuum-cleaner that helps suck up the proceeds of enterprise along with the Four Leech Industries.

Also missing: the tech, innovation, creative, start-up stuff – but that’s the purpose of this system.

The point of this Friday-meander is that many Hong Kong people are so accustomed to the arrangement described in A System Apart that they don’t question it. They don’t see anything odd about the way the political and economic structures are mirrors. They don’t think it’s a strange coincidence that our entire ruling class comprises personalities who wouldn’t last five minutes in either a political or economic system that was open to competition. And of course, they don’t link the city’s stagnation with the Communist Party’s desperation to exert and maintain control.

I declare the weekend open with a bit of nostalgia for the laid-back old days – toad-worship.

4 Responses to Stagnation by design