Posted on September 1, 2017 by biglychee

The Hong Kong government is going to struggle to balance its international image as guardian of freedom and rule of law as it assumes growing responsibilities to crush dissent as directed by Beijing. The latest barb comes from one Kerry Kennedy. She wouldn’t normally attract attention here, but as JFK’s niece (daughter of Bobby, also ex-wife of New York Governor Andrew Cuomo) her announcement of a Joshua Wong Radical Hip Youth Education Initiative to spread the example of Hong Kong’s most famous political prisoner is going to have local officials squirming that little bit more.

Meanwhile, pro-Beijing voices are trying to assure the domestic audience that everything is fine now. The pro-democrats are in disarray and demoralized (can you remember a time when they weren’t?), and the Occupy/Umbrella/civil disobedience thing was a law-and-order problem that has now been fixed by sensible judges who understand.

In other words, the atrocious policies, the unaccountable government, the creeping rule-by-law authoritarianism of Beijing either don’t exist at all or are wildly exaggerated – and certainly have no connection with the protests, discontent or anger, which are basically just the sort of teenage psychological problems you get from not locking enough delinquents up.

Chief Executive Carrie Lam shouldn’t need to set up another 30-strong Advisory Task Force Committee Board to tell her how successful this is going to be. As Beijing undermines Hong Kong’s institutions and values to silence and intimidate dissent, the local administration will shed the credibility and integrity it craves overseas. At this rate, we will sink below Singapore’s level of civil and human rights in five years, max.

One thing Carrie’s Consultative Advisory Task Force Councils do tell us loud and clear is that improved governance – which could still placate much of the public disquiet – is not an option. For example, officials will continue to put Beijing’s local old-economy cronies and vested interests ahead of innovative enterprise and competition that could democratize the economy.

With that in mind, I declare the weekend open with a new word – ‘bed-blocker’, which I learned in this FT piece about young Hongkongers’ prospects being stifled by the city’s octogenarian tycoons. This cruel phrase refers to an elderly person who is such a waste of space that others suffer. By ‘cruel’, I mean ‘vividly appropriate’. 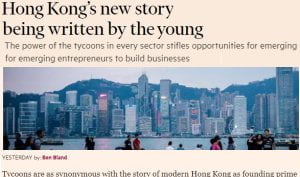 For emergency mid-typhoon self-zombification purposes only over the weekend – a four-episode binge of Petticoat Junction.