No let-up in CY’s final days

Hong Kong had been expecting Chief Executive CY Leung to fade from the scene reasonably quietly. And sure enough, his final few weeks in office looked set to fizzle away. To pass the time, opposition lawmakers have launched a predictable-and-futile, last-minute attempt to impeach the man, who responds by maintaining with a stony face that his housing policy was a success ‘with a four-year lag’  – and lapsing back into robotic ‘Belt and Road’ slogans for kids.

But no. The action continues to the very end, as CY sends jack-booted municipal thugs to chain-saw adorable, cute, fluffy egret chicks into little bloody pieces. After several years during which intimidation and purging of localists and other dissidents has become increasingly disturbing, it seems an extreme but logical next step.

But apologists for the government claim that the fowl were merely collateral damage in the administration’s unceasing battle against the Dreaded Tree Menace. It is unfortunate, but the birds were in the wrong place at the wrong time.

CY still has three weeks to go. The squirrels in my local park this morning looked even more alarmed than usual. 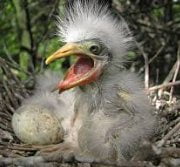 5 Responses to No let-up in CY’s final days