Asking nicely for warnings about rule-of-law-shredding

Any more polite and it would be wanton groveling. Hong Kong’s Law Society respectfully asks the Chinese government to take a more consultative approach when the Standing Committee of the National People’s Congress is going to discusses an ‘interpretation’ of the Basic Law. The lawyers say the current procedure can seem ‘rushed’.

Training and instinct require lawyers to use bland and moderate language as a matter of course. And presumably the Law Society includes some openly ‘patriotic’ members who would want a joint statement to Beijing to be suitably courteous. But this deferential tone also typifies what Christine Loh once called the ‘pre-emptive cringe’ – the perceived need to flagrantly kowtow to the Almighty Panda in order to assure it of your ‘sincerity’. (And increasingly worldwide, to avoid hurting its precious feelings. Australia is the latest victim of gratuitous Panda-worship, hurriedly bowing to Mainland conference delegates’ tantrums over Taiwanese.)

In plain non-obsequious English, an ‘interpretation’ of the Basic Law is actually an amendment, usually a detailed expansion. It is not based on such legal niceties as framers’ original intent, but is purely a quick rule-of-man fix, to plug what the Communist regime sees as an unacceptable loophole in the wording. Although formally delivered by the Standing Committee of the NPC, it is decided by the same one-party state structure as everything else in Chinese government.

To put it more bluntly, a Basic Law ‘interpretation’ is simply a re-writing of the law to reverse or pre-empt a local court ruling Beijing doesn’t like. It is so crude an expedient to override Hong Kong’s rule of law to ensure that the dictatorship has full control, that Beijing has so far used it relatively sparingly. Still, in the spirit of creeping Mainlandization, when it was last used, to bar localist lawmakers last year, it tossed local legal process aside with unprecedented contempt.

Because of the possibility of ‘interpretation’, none of us can truly be sure what any part of the Basic Law really means – because Beijing can change the meaning on a whim. While the words of the Basic Law seem to protect our individual liberty, property rights and other freedoms, Beijing can decree that the words mean anything else it chooses.

It is a panic button the Communist system can use without warning to cut off rule of law and judicial independence in the city. The Law Society is asking: ‘Could you please think about giving us a bit of warning when you do this, so maybe we can discuss it down here’.

I declare the weekend open with a coffee – freshly arrived in a big bag from a Djibouti connection. Aficionados of Mainland ‘fake Starbucks’ logos will be overjoyed to see the art form has spread to Ethiopia. A cup of ‘Dreadbucks’… 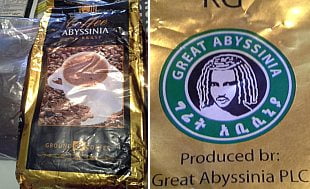