What is the name of the Hong Kong supermarket chain founded in April 2015 by China Resources Vanguard and Tesco?

Thanks to cartelization, Hong Kong has only two major supermarket chains. But the big two conglomerate-owned grocers make up for this poverty of consumer choice by offering a bewildering range of sub-brands. Thus Hutchison’s Park N Shop also appears in the guise of fancier stores named Fusion (Park N Shop with Marmite and kimchi) and Taste and Great (Fusion plus camembert and HK$500 Japanese strawberries). And Jardines’ Wellcome runs the bizarrely named Market Place by Jasons (its version of Fusion) and Olivers (its longstanding ‘international’ camembert etc outlet).

Presumably, the tactic is to attract the middle class and foreigners with nicer-looking stores and the nasty frozen pizzas and wieners expats feed their kids – and of course charge them higher prices.

The two big chains are notorious for pushing wholesalers around. But as a duopoly accustomed to taking consumers for granted, they carry a largely similar and limited range of products. This leaves opportunities for niche players like 759, who import unpredictable varieties of extreme Japanese snacks, obscure European canned goods and even no-brand rice and other goods, bypassing the cartel’s distribution stitch-ups.

The Mainland-owned Vanguard chain is perhaps a sort of hybrid. Its rather seedy outlets lurk in back-street neighbourhoods a few minutes away from a Park N Shop or Wellcome. Perhaps the shoe-shining Hong Kong tycoon duopolists, normally highly protective of their turf, avoid getting tough with a Chinese state-owned company. Vanguard is also a partner with Tesco, which supplies a selection of cheap British, Polish and Thai packaged foodstuffs unavailable elsewhere.

The new Vanguard-Tesco spinoff chain seems to be an attempt to emulate the big boys’ Fusion and Market Place – with relatively clean, bright store interiors and an emphasis on (relatively) classy, sophisticated, exotic fare aimed at the bourgeoisie. If you don’t mind grappling with Slavonic languages on the label, Tesco’s Polish beer seriously undercuts the imported brews you see in Olivers (or Marks & Spencers, etc).

As for the name – of course, only the most alert FCC quiz teams got it. I’ll bet none of the three candidates in our Chief Executive ‘election’ could answer the question (Carrie Lam probably can’t name a single supermarket group in town). Anyway, in the finest local tradition of choosing atrocious English names for supermarkets, it’s called U Select. (U expected something better?)

I dropped by one a few days ago. I was entranced by these dainty little packs of soup, and even more excited to see that it was cat soup – which I’ve never tried…

But then I find that it’s soup for cats. Because there’s nothing your pet tabby wants to lap up more than a bowl of fish consommé. (I told you these guys are aiming at the high-end market.)

Also on offer, for those nostalgic for the days of Jiang Zemin and Tung Chee-hwa describing the closeness of Hong Kong and the glorious motherland – Lips and Teeth dental-hygiene-themed gummies… 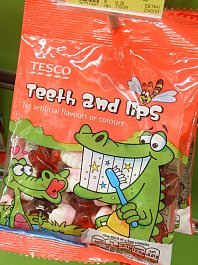