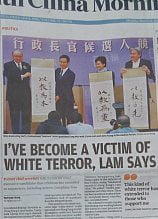 If you find the ‘two meetings’ in Beijing too exciting, you’ll have enjoyed yesterday’s Hong Kong Chief Executive quasi-election debate. The highlight of the snooze-fest, by all accounts, was former Chief Secretary Carrie Lam claiming to have been the victim of ‘White Terror’.

In the Chinese context, this refers to the Kuomintang’s Leninist-style persecution of alleged Communists – beheadings in the street, etc. Hong Kong’s pro-democrats have more recently debased the phrase by using it to describe any bullying or other campaign against them. Carrie has now reduced it further to mean on-line criticism.

It is another in a string of examples of the highly experienced bureaucrat’s cluelessness about almost anything to do with real life. (According to a second-hand anecdote, she recently inquired – politely, as if to break the ice – about one reporter’s ethnicity before starting an interview. From toilet paper to MTR turnstiles to Mainland beggars, she seems oblivious about social norms and appropriate, non-clunky behaviour.)

The Chinese Communist Party has already selected Carrie to ‘win’ this rigged poll, but is panicking about whether she can attract enough of the 1,200 (mostly loyalists’) votes to look convincing. Beijing’s officials and proxies face a quandary. If they pressure the less-zombie-like voters too obviously, they will undermine Carrie’s eventual mandate; but if they don’t nag and push them, that will undermine her eventual mandate as well. And people think being a dictatorship is easy!

The fact that Beijing’s officials think any result from this charade can be credible shows that they suffer from their own impaired perception of the world. Today’s hand-wringing on the subject comes from Basic Law expert Tian Feilong.

He is worrying that overly zealous manipulation of the process could harm Hong Kong people’s trust in the 1,200-strong zombie-packed Election Committee, and leave Carrie weaker as CE than outgoing CY Leung. This is the guy who thinks the Hong Kong courts are wrong to convict cops of beating prisoners, so of course he could be wildly wrong, and she will be a dazzling success.

Trying to think where I’ve seen that face before…