The decline and withdrawal of the US – as exemplified by the abandonment of the Trans-Pacific Partnership free-trade pact – creates a space that China can and will occupy. The South China Morning Post is a predictable proponent of this indisputable concept/meme/dream/fact…

…but similar commentary appears in the much of the Western media…

There must be a reason why not only Donald Trump, but Bernie Sanders and (in desperation) Hillary Clinton promised to ditch TPP. That reason is that the TPP was over-weighted towards producer rather than consumer interests. The media commentators’ fondness for these institutions and structures is a bit of a puzzle. Is it the trips, lunches, giveaways at press conferences, or what? (Another example is the commentators’ freak-out over Brexit – as if the EU wasn’t a bloated bureaucratic-visionary over-reach that neglected the interests of people. Another is taking Xi’s blather, or anything at Davos, seriously.)

Donald Trump clearly has narcissistic personality disorder, and this will create messes and trouble until he leaves office. However, the Chinese Communist Party has an even bigger institutional, collective problem. The CCP is not only sociopathic, egocentric and (it seems) victim to a fantasy-based world-view – it has full-blown paranoia.

It can’t relax enough to consider grand strategy. It’s too busy putting out real or imagined fires and making everything up as it goes along. It has no values to expound. It cannot handle, let alone establish, rules-based systems, or otherwise set positive examples and standards. All it knows is raw power and control, and brutality. It has no capacity for enlightened self-interest (a la Marshall Plan) or shared responsibility (say, NATO).

The good news is that a CCP-led China won’t get bogged down in pointless interventionist adventures. But it also means it can’t/won’t provide ‘leadership’ for the world’s economy – they can’t even face basic reforms to their own.

The CCP’s only agenda is keeping itself in power in China, in a world full of enemies. Everything else must be subservient to that. Mercantilism, protectionism and IP theft work. Strutting around with a second-hand aircraft carrier and cultivating tributary regimes in Pakistan and Cambodia conceivably help. But anything else – certainly even-handed multilateral engagement – is a dangerous distraction. Replacing the US on the international stage isn’t an option.

A replacement for Trump, on the other hand, is realistic, and only a matter of time. 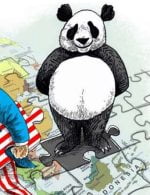