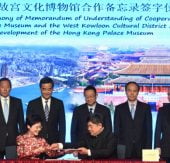 July 1, 2017 will be the 20th anniversary of the handover of Hong Kong from the UK to China. At the behest of Chief Secretary Carrie Lam (allegedly, etc), Beijing will give the city a reunification gift in the form of antiques too humdrum for the Kuomintang/Red Guards/Communist Party to grab/destroy/keep, to appear in a Hong Kong Palace Museum.

By groveling for such an act of patriotic generosity, Carrie hopes to get her apparently deepest, if inexplicable, wish: to succeed discredited CY Leung as Chief Executive. Her role in ‘facilitating’ today’s out-of-nowhere Lok Ma Chau polluted-swamp Shenzhen-cooperation Techie Flimflam Zone-Hub looks like a similar credentials-proving performance.

But what would the Hong Kong people like from Beijing on this special occasion? The answer, Ming vases aside, is surely: better local governance.

At the time of the handover in 1997, Hong Kong was clearly the most prosperous, energetic and progressive place in Chinese-speaking (if not most of) Asia. Today, Taiwan has leaped ahead on democracy and social reformism, Singapore is statistically wealthier and (rightly or wrongly) increasingly confident about a more liberal future course, and Mainland cities are at least in some respects far better planned and more livable.

After decades of Mao, the KMT and Headmaster Harry Lee, Sinic Asia Ex-Hong Kong inevitably had some catching-up to do, so it shouldn’t be too surprising that Hong Kong is now relatively less advanced socially or economically, or in pop-culture and soft-power mojo. But most Hongkongers have a sense that their city has seriously under-performed in absolute terms since 1997.

Some supporters of the local establishment might point out that people’s expectations have risen, and/or that globalization has increased inequality and dissatisfaction elsewhere too. Others (including some candid pro-CCP loyalists) might concede that governance has lagged – but it is the fault of the city’s pro-democracy and opposition forces for hindering the administration or spreading chaos.

Many, if not most, local people would put the blame squarely on the city’s post-1997 leaders and – more to the point – the Chinese government that appointed them and presumably approve their crony-pampering policies. It shouldn’t have been too difficult to appoint officials who would at least match the British colonial regime. But Beijing installed, and keeps installing, administrations that fail to meet basic expectations of competence and fairness.

Specific major (and overlapping) failures since the handover: overt favouring of tycoons/vested interests; deliberate reduction in affordable housing supply; unmanageable influxes of Mainland tourists/shoppers and unskilled immigrants; expenditure on infrastructure white-elephants instead of social welfare/quality of life.

This has led to an inevitable popular backlash: rising demand for democracy and political reform; growing alienation from Mainland ways and culture; increased awareness of local identity.

Which has led to a fiercer popular backlash, especially among the younger/educated population: street demonstrations; outright hostility to the Communist regime; even an independence/localist movement.

So we welcome 2017 and the July 1 anniversary – a time to ask what another 20 years of this will bring.