Pro-Beijing lawmakers walk out of the Legislative Council, leaving it without a quorum, thus leaving three young radicals unable to take their oaths and Council seats. The pro-Beijing boot-licker members are demanding an apology from Sixtus Leung and Yau Wai-ching for insulting China the first time they took their oaths. The implication is that they would allow the two splittists to be sworn in – if the pair groveled for forgiveness from all the Chinese with hurt feelings around the world.

If so, this stance falls short of the Government/Liaison Office view that the two splittists must be denied their places in Legco under any circumstances. Perhaps better coordination is on the way (it all seems a bit rushed).

The government attempted (unsuccessfully) to get the courts to bar the Youngspiration Duo on the grounds that they failed to take their oaths correctly first time and there is no second chance. But the real aim – by order of the Liaison Office – is to completely ban anyone from running for or entering the legislature if they hold pro-independence views.

If and when this principle is established, it will presumably be extended to school teachers, college professors and other public-sector employees. Ultimately, anyone expressing pro-independence opinions will be guilty of a thought-crime and subject to persecution in some way.

This is a tried and tested method. In Xinjiang, the Communist Party forces men to shave their beards off or teach their kids to pray, and as a result Islam has just gone away and been forgotten, and everything is harmonious and perfect. In Tibet, the Communist Party shuts down temples and ‘disappears’ monks who object, and as a result the local culture and separatist sentiments have completely vanished, and everyone is totally happy and calm. Obviously, similar policies will eradicate Hong Kong’s distinct identity and turn everyone in the city into happy and obedient Mainlander-replicas.

But we are running ahead of ourselves. The pro-Beijing lawmakers’ walkout emulates pro-democrats’ tactics in the last LegCo. The United Front and government propaganda machine leapt to portray such disruption as nihilistic, money-wasting and generally proof that pro-democrats were anti-social fiends – to the approval of some hard-working citizens sick of constant bickering. Even the South China Morning Post’s voice of grumpy old fogeys who hate the young says the loyalist members have disrespected the court and lost the ‘moral high-ground’ they had when they didn’t engage in disruptive behaviour… 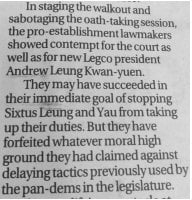 The Standard’s editorial is harsher, accusing Chief Executive CY Leung of dangerously risking damage to the relationship between legislative, executive and judicial branches. It sees panic and desperation… 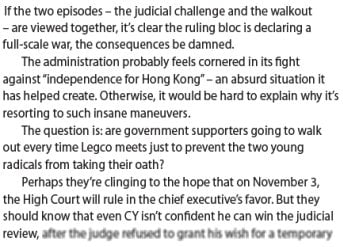 The Standard is part of the anti-CY tycoon establishment, but is hardly alone in (perhaps over-simplistically) seeing the pro-independence phenomenon as a creation of the Hong Kong government and the Liaison Office.

The government is eager to stress that it can handle this locally. In other words, officials want to avoid a Basic Law ‘interpretation’. This joke-mechanism, by which Beijing ‘reveals’ a hitherto unseen meaning to part of Hong Kong’s mini-constitution, would provoke incredulity and renew rebellion if it were used to affirm the idea that ‘cracking down on pro-independence forces [thoughts] in Hong Kong is supported by the law’.

Some fear that the localists might fail to convey the big picture to the public, allowing United Front innuendo about ‘infantile mayhem’ to turn moderate opinion against them. But the real danger to the radicals is that CY and his buddies wise up and cease responding with increasingly stupid and deranged attempts to crush the localist menace. And Beijing’s hypersensitive allergy to any mention of the ‘I’ word makes that unlikely.