‘Both ends of bridge to open at same time’ shock

Of all Hong Kong’s multibillion-dollar white-elephant mega-projects, the Zhuhai Bridge is arguably the most dimwitted. The Third Runway and the High-Speed Train Tunnel to that-Guangzhou-suburb-we-can-never-remember-the-name-of are both horrendous wastes of money, but at least follow the demented logic of our tycoon-bureaucrat policymakers – cram more people and stuff into the city, then more, then more again. The Zhuhai Bridge won’t even do that. It links a place that can’t accommodate any more road traffic (Hong Kong) to a place no-one wants or needs to go to (Zhuhai) via a place that is far easier to get to on the existing ferry, and will actually not admit any vehicles beyond a remote parking area, and is kind of a seedy tacky dump (Macau). Hardly anyone will use this bridge.

So news that its opening is delayed is rather underwhelming, especially as we heard it several months ago, complete with lurid gossip about supporting parts of the bridge sliding around on the sea floor. The Standard reports that, when it does open, it will do so as one complete bridge – not in stages as different segments are completed. A great moment in infrastructure project-management, as the engineers determine that people won’t use a bridge if only one end is open. (Actually, if the users are Mainlanders, the engineers are wrong. Look at how the hard shoulder along the Guangshen S3 Expressway overlooking the sea near Shenzhen airport is crammed with picnicking SUV owners.)

The report goes on to say that it’s surprising that the Hong Kong end of the project is the one full of screw-ups, as it’s the Zhuhai segment that has some Seriously Scary construction challenges. However, the ingenious and resourceful Mainland contractors have devised some sort of fix, so everything’s going to be tickety-boo. I mean, it’s just a ‘submerged tube tunnel’ – what could go wrong?

The ultimate reassurance that the delay will be manageable comes from an academic. Zhuhai and Macau have small populations, and economic integration between them and Hong Kong has been ‘of limited scale recently’. You could delay the bridge for years and years, and no-one would notice. 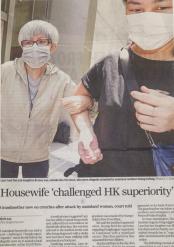 The South China Morning Post brightens our day with the Quintessential Everyday Story of 2016 Hong Kong. It has everything: psychopath Mainland woman (in orange tracksuit, but you knew that); some heavy Maxim’s-cake-shop action; Mainland kid who is bully and (we imagine) standard-issue one-child-policy brat; valiant Hong Kong grandmother defending herself and grandchild from chip-on-shoulder psycho Mainlanders; attack on grandma’s daughter, Bryony; emergency trip to Pineapple Bun-Size Wound Department at Prince of Wales; threats of posting video on-line; locust-baiting protestors at court ‘hurling abuse’ at Mainlanders, who are by now, presumably, rethinking this whole cross-border shopping idea. 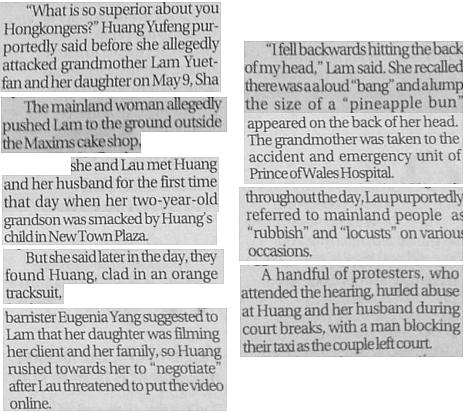