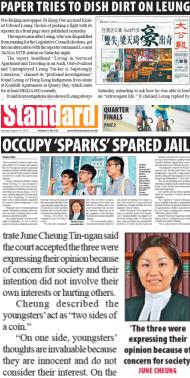 superstar Edward Leung. And following the contrived panic (from contrived ‘Academy of School Managers’ group) about pro-independence teachers, another United Front mob called Real Hongkongers’ View gather outside a teachers’ union to accuse it of encouraging sedition, splittism and devil-worship. The Education Bureau, as if fearful of being left out, yaps its approval.

No-one has ever actually seen a pro-independence teacher.

The above four links respectively report: character assassination, violence, intimidation and threats of being fired. Insofar that this campaign is fighting a barely existent, mainly imaginary enemy – a Hong Kong ‘pro-independence movement’ – it would be funny. But the way even fairly moderate figures and government agencies are being required to publicly align themselves with this artificial hysteria is creepy.

Possible reasons Beijing’s Liaison Office is mounting such an elaborate crusade, in increasing order of likelihood:

Anything I’ve missed? (They’re all on drugs, or something?)

For anyone keeping a list, don’t forget to add another area of creeping Mainlandization in Hong Kong: financial market analysis. The Communists are so far keeping their claws off the courts, which have found Joshua Wong and friends charged with Occupy offences to be ‘brave youths who express their opinions’. Something tells me brave Magistrate June Cheung who expresses her opinions isn’t going to be getting a Gold Bauhinia Medal any time soon.

11 Responses to Latest battles in war on pro-independence menace