Even before the Olympic Games are over, the Chinese gold-medal-winning athletes’ tour of Hong Kong has been planned. You might think this is rather bold; for all we know, most will come home clutching nothing more than lowly bronzes. But wait! The presumptuousness is just beginning.

The organizers are assuming that the Hong Kong public will glow with patriotic pride and welcome the sportsmen as national heroes. But it is dawning on officials that the city’s pro-independence and localist forces will surely grab the chance to turn the symbolism and sentiment on its head. Just the fear of counter-demonstrations will ruin the occasion, as the cops go into Visiting Mainland Dignitary Overkill with barriers, bag-searches and unseemly scuffles with innocent, studious-looking teenagers. 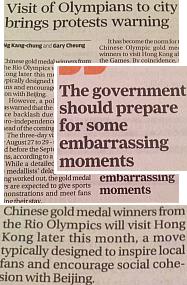 The authorities have apparently timed the Olympians’ triumphant visit to precede the Legislative Council elections on September 4. In their minds, the sight of victorious Mainland swimmers and weight-lifters will inspire voters to support pro-government candidates. Their minds, you may respond in shock, must be diseased. I couldn’t possibly comment.

(It’s not my job to do officials’ lateral thinking for them, but simple measures to take would include postponing the tour until after the election, and/or mixing all the Hong Kong athletes into the parades and performances. At least give the localists a challenge in dreaming up creative ways to mock and satirize.)

The organizers are probably planning to send the Olympic athletes into local classrooms to meet the kids and encourage them to realize their dreams, aim high, or run around or something. But not so fast! The enemy has already thought of that, and we now have localist groups being set up in secondary schools.

Of course, the schools are currently closed for summer, so this can’t really be happening. It seems someone started a ‘Studentlocalism’ Facebook page back in April. Annoyed by several months of Hong Kong and Chinese government freaking-out, mischievous kids subsequently treat it as a real thing; panicky officials rant about ‘banning’ such dangerous or illegal ideas from our campuses; more high-schoolers take an interest and behold – you have (or soon will have) an actual pro-independence ‘movement’ apparently spreading among secondary students.

Take a look at the url of that South China Morning Post article. For a while yesterday, that same url linked to a very different report in which 31% of Hong Kong U students supported armed revolution…

The original webpage is here. The story concerns an arguably trivial student magazine poll, but clearly someone at the SCMP feels horrified at just using the words ‘armed revolution’. (An uncensored report is at HK Free Press.)

In two years, Hong Kong has gone from moderate demands for democratic elections to an environment where petrified authorities are frantically trying to stamp out an independence movement apparently cropping up all around them, and jumpy loyalist editors feel a need to delete any mention of armed uprisings. For making something out of nothing, the Chinese Communist Party deserves a huge gold medal.