No shortage of mud to fling

Hong Kong’s pro-government politicians aren’t looking forward to September’s Legislative Council elections. Guided, cajoled or intimidated by the Chinese Communist Party’s local United Front, they must – unless told otherwise – publicly back hugely unpopular Chief Executive CY Leung. When asked for advice about how they can appeal to voters despite this liability, CY throws the problem back at them, telling them to endorse or not endorse his administration on its merits. On the one hand they have to answer to Hong Kong voters; on the other they have to reckon with Beijing’s enforcers.

Pro-democracy opposition candidates will have some powerful ammunition to use in the forthcoming campaign. CY’s much-vaunted focus on welfare issues has yet to make much noticeable difference to people. The pan-dems can attack the government’s supporters on a whole range of issues like housing, poverty and inequality, and neighbourhood anger over lead in water or management of public-housing estates’ shopping malls.

But that’s just the start. While at least some loyalists can claim to be fighting for the people on such livelihood issues, they are more exposed to accusations that they are associated with CY’s clumsy policy of Mainlandizing Hong Kong. If you dig around you’ll find that most pro-Beijing politicians have some record of supporting something unpopular, idiotic or scary. Examples could include links with patriotic-style National Education, the bizarre HK Army Cadets Association, or local ‘Belt and Road’ propagandizing.

Then there are Beijing’s most serious and shocking attacks on Hong Kong’s autonomy and values in the last few years. The heavy-handed White Paper/Standing Committee edicts of 2014 declaring Hong Kong to have no entitlement to self-rule or democracy. The abduction and forced confessions of the book-sellers. And now the apparent defenestration of the Independent Commission Against Corruption’s top graft buster, the resignation of a senior investigator, and – Hong Kong’s version of a counter-revolutionary uprising – a staff banquet boycott.

Not all pro-Beijing politicians have publicly aligned themselves with all these events. And some parts of the electorate will be more outraged than others by particular examples of encroachment of the Communist one-party system in Hong Kong’s pluralist, rules-based society. But the potential for some real negative campaigning and flinging of mud that sticks effectively on all the right villains is mouth-watering.

Meanwhile, further proof that Beijing’s henchmen at the Liaison Office are giving the orders comes with today’s news that candidates for the Legislative Council must sign what looks like a statement waiving their right to express a particular opinion. Anonymous Spokesman 1 says it is to ‘avoid confusion to voters’, while Anonymous Spokesman 2 claims that signing it and subsequently being found to have lied will result in ‘criminal sanction’. This I would love to see.

I declare the weekend open with advice that anyone who wishes to complain about the collapse of taste and public morals and (they said it could not be done) the lowering of the tone of the Wyndham Street strip of tawdry bars, can complain about the seedy plan to install a branch of Hooters. The only snag: you have to travel back in time to May 21… 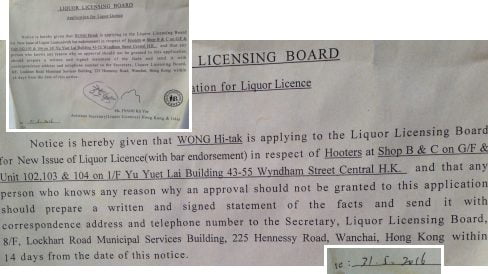 For an idea of what sort of Neanderthal-level sleaze and degradation we can expect, this is just in from the nation’s capital…

5 Responses to No shortage of mud to fling