Is PMQ turning into a mall full of big-brand fashion outlets and rich kids’ trendy restaurants? Yes it is, partly. But under the circumstances this is hardly surprising, and it could have been a lot worse.

The former Police Married Quarters on Hollywood Road could have been sold to a developer, demolished and used to build a luxury high-rise for sale to money-laundering

Mainlanders. Or it could have been handed over to a tycoon to mutilate beyond recognition as a luxury retail concept heritage theme historic zone hub. Instead, in a stunning fit of vaguely decent taste, the Hong Kong government decided it should be preserved and adaptively re-used as a local creative concept start-up design incubator hub heritage zone. In keeping with the bureaucracy’s obsession with not spending money on things that might make life nicer, the project would have to be self-financing, in that free-multi-billion-dollar-patch-of-real-estate-thrown-in sort of way.

Bids were invited. Callow, naïve, Kowloon-dwelling, financially illiterate, not-to-the-manor-born applicants who would be out of their depth were politely turned away, leaving a group of pro-establishment philanthropic businessmen called the Musketeers Foundation and design-school partners as the winners.

The ground-level premises at the complex are occupied with biggish brands that nonetheless fit in with the ‘local design’ ethos and remit of the place – Vivienne Tam and Goods Of Desire, for example.

The upper floors house various creative and arty start-ups and obscure/minor brands. A few overtly commercial-type operations sneak through; on a visit last weekend, I spotted a nail salon and a photographic studio – though both of a heavily bohemian/artisanal/hipster sort. Also, an art-jamming joint. Most of the units accommodate mildly weird and offbeat arty-crafty clothing, stationery, household-ware and the inevitable jewellery (those who can, do; those who can’t create home-made bangles). The one thing they all have in common is that they offer stuff you either don’t want or wouldn’t pay such prices for.

On the top floors are some mysterious top-secret ‘skunk works’ of the Hong Kong creative start-up world.

Outlets come and go, and you never know what will be there. This weekend I saw these eyes in leather, which were interesting although their purpose was unclear…

Indeed, it is hard to determine exactly what many of these operations are producing. That wasn’t the case with the cardboard furniture place, which even offered a charming child’s coffin…

…and to hell with the feng shui.

One thing that has changed since my last visit is that the northern block now has a gleaming glass-clad new rooftop floor, which would put the most audacious New Territories illegal structure to shame… 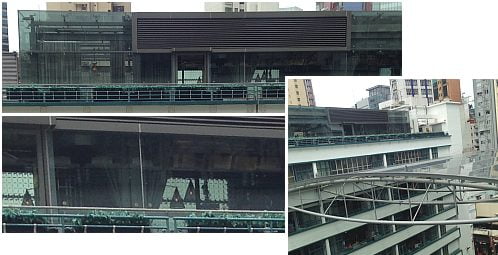 This is Isono, home of 100% Bellota acorn-fed tapas, in which property tycoon Raymond Kwok’s son reportedly has an interest. I am guessing that the place has far more space than most pretentious and overpriced Soho restaurants could ever dream of, and at less rent per square foot. How open and fair was the bidding for the lease? A juicy scandal would be great, but no-one seems to be running with this. Governance comes under the usual great and good with a dash of creative-industry (amazingly, no Allen Zeman).

Essentially, the big chains on the ground floor and the fancy restaurants are subsidizing the small start-up tenants, whose cardboard hand-crafted kids’ caskets and bizarro organic leather accessories would never otherwise have a physical retail presence, leaving Hong Kong a drabber and more humdrum town.

Obviously, the space could have been used for something better – the mostly unused open atrium area between the two blocks could still be a great park/play area/street-food court if the managers were to exercise a little of the creativity they are supposed to promote.

As an oasis of semi-uncommercial, avant-garde anarchic zaniness and fun, PMQ is crap – but in Hong Kong it’s surprising that it’s there at all. 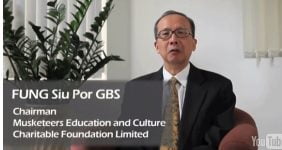 3 Responses to Annual inspection of PMQ