Brits in HK (and elsewhere in China) – book review 3

I recently acquired some of Blacksmith Books’ latest. They have a common theme: British people who came to Hong Kong (and in one case went elsewhere in China). Perhaps inevitably, the older the account, the more interesting it is. Here’s the third and oldest… 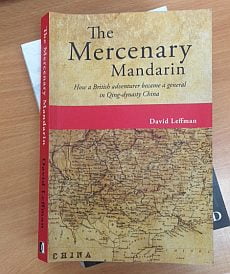 The Mercenary Mandarin: How a British adventurer became a general in Qing-dynasty China by David Leffman

How did the Victorians do it? There’s Brunel, who envisioned, sold, designed and built world-beating railways, tunnels, bridges and ships. Mrs Beeton, who wrote a 2,000-page tome of recipes and household advice while still in her 20s. Charles Darwin, Florence Nightingale, William Mesny.

Who? Born in Jersey in the late 1840s, Mesny went to sea at age 12, sailed the world and turned up in China in 1860. After a spell in Shanghai, he came to Hong Kong around 1861-62 and worked as a guard at Victoria Prison just up from Hollywood Road. He left in search of greater things.

The story sounds outlandish, but David Leffman – using Mesny’s accounts (including a published Miscellany) and retracing the man’s journeys – seems to have worked out what happened during this only-in-the-19th-Century life.

Mesny goes back to Shanghai and starts trading/smuggling across internal customs authorities and Taiping Rebellion-era feuding territories up the Yangtze River. After smuggling salt, he moves onto arms, and from that it’s a short step to becoming a military instructor to the customers, from which he graduates to becoming an officer in the provincial forces fighting the Miao in Guizhou (remote even today, between Sichuan and Yunnan).

Among other things, he finds a route through regions infested with Muslim rebels to Burma (the British colonial elite recoil at his ‘gone native’ garb), and travels extensively around the western interior, from the edge of Tibet through the desert to Beijing. Holding an imperial rank, he meets various governors and commanders (cultivating some, alienating others), stays in disgusting inns, urges everyone to build railways and mines, gets into Chinese food so much he becomes fat, buys a few antiques, drops in on isolated Western missionaries and (mostly) extricates himself from frequent attempts by people to marry their daughters off to him. It sounds like a parody, but it’s real. And you’ve never heard of the guy.

My hunch – they had lots of useful modern technology (in transport, manufacturing, warfare), without all the time-wasting stuff (Game of Thrones, cat videos on YouTube), and they had little alternative to extreme weirdness.