Zhang does ‘warm and cuddly’ act

If we are to be honest, we will miss Zhang Dejiang after he leaves Hong Kong today. The Hitherto Little-Known Ultra-Important Beijing Official has made a unique impact on the city in his three days here. As Like the representative of some alien planet, he has been kept in sterile environments within expansive sanitized zones, transported in sinister, dark-windowed, bullet-proof, lead-lined limos, and surrounded by layers of security, from giant barriers to sniffer dogs to SWAT teams and mysterious men in black – maybe for his protection, maybe for ours. Hardly anyone actually saw him in the flesh, and some say he has not really been here at all, or even that he doesn’t exist, and the whole thing is an elaborate Roswell hoax. 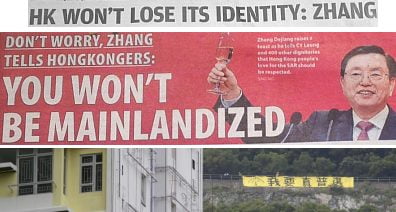 One official reason for Zhang’s presence here was to speak at a ‘One Belt, One Road’ summit. The South China Morning Post claims that ‘for the first time, he [or anyone] spelt out how Hong Kong can seize a role’ in the grand yet incomprehensible vision/initiative/hairball. Except, of course, he didn’t: it was just the usual blather about professional sectors, financial services, ‘people-to-people exchanges’ and cooperation with the Mainland. To my knowledge, no-one has ever identified an actual business opportunity arising from ‘Belt and Road’, except for conference-organizing PR-gloss hype-pimps.

With that out of the way, Zhang turned to his presumed real task: winning the hearts and minds of Hong Kong. Few sights are more painful to behold than a senior Chinese Communist Party official attempting to be nice. They do it with undisguised distaste, only when the usual thuggish methods like violence and bribery have failed, and as part of a calculated strategy to subsequently crush/control/consume the target.

He did it pretty well. He acknowledged Hong Kong’s non-Mainland characteristics (in contrast to Beijing’s 2014 white paper proclaiming the city a mere speck in the Party-State’s domain – which helped spur the Occupy/Umbrella backlash). He vowed not to

Mainlandize the place. He admitted there were local problems. Obviously, he doesn’t mean it, but it takes some ‘eating bitterness’ for a totalitarian regime’s spokesman just to utter these conciliatory words. He even said that ‘localism’ was OK in moderation. Democratic Party veteran Emily Lau came away from a brief chat mildly impressed by his non-frostiness.

What does this tell us? It tells us our ‘pro-independence movement’ friends are hitting a major, major nerve.

The Communist system is institutionally incapable of sincere, sustained ‘hearts and minds’. It is a zero-trust mindset: control the masses by force, pat shoe-shiners on the head while they are useful, and anyone else is hostile and a mortal threat. It can’t not alienate pluralist societies. Tsai Ing-wen is being sworn in tomorrow as Taiwan’s new democratically elected President. China’s gracious warm-and-loving gesture to its compatriots? A mock military invasion.

9 Responses to Zhang does ‘warm and cuddly’ act