The yellow umbrellas are back. Hong Kong’s raucous opposition protesters ‘go guerilla’ in response to the bizarrely over-the-top security measures put in place to insulate Beijing official (and perhaps Living God) Zhang Dejiang from local colour and ambiance. As-it-happens reports from the front-lines here, here and all over.

The (mostly small-scale and restrained) gatherings are at least partly provoked, or inspired, by the excessive precautions. What self-respecting activist can resist the dare represented by the huge water-filled barriers, road closures and thousands of cops? This is another way of saying, again, that most Hong Kong people had barely heard of Zhang until the government started to glue paving stones down in his honour a week ago.

The authorities hint at known threats of ISIS or other terrorist attacks. But if such a

danger exists, why are they protecting just one guy and not the other 7 million of us? And why would ISIS have any more of a clue who Zhang is? (To add to the mystique and enigma surrounding the guy, Google News’s search box associates him with Rwanda. Perhaps, like the US Vice-President, he gets all the Stupid Stuff to do.)

Suspicions linger that the cops camping on Lion Rock, the police banners stored all over Central, the scuba-divers checking for bombs off the waterfront and the suspension of work at an entire Wanchai construction site are a mark of Zhang’s lack of importance. As befits a man whose prime official purpose while here is to deliver a keynote speech on the ‘Belt and Road’ concept-slogan-thing.

That ‘Belt and Road’ Summit takes place as we speak, and apparently the conference centre is surrounded by lots and lots of bullet-proof, metal-detecting security. The South China Morning Post’s Alex Lo chooses this moment to write about how ‘Belt and Road’ is a visionary strategic plan to liberate China from the jungles and steppes and US Seventh Fleet that imprison it. Maybe the grandiose neo-imperialist rip-off fantasy looks that meaningful from afar (Lo has apparently relocated to Canada recently). But closer to home, surrounded by the mightiest security cordon Hong Kong has ever seen, it looks like just another layer of the Emperor’s New Clothes.

While the HK Police prepare their highly trained squadrons of killer bees to attack any pro-democracy drones approaching North Wanchai, I take a quick stroll through my own neighbourhood, ahead of its daily infestation of Korean tourists.

It seems just a few months ago – early January, in fact – that I noticed a new restaurant called Juhu Beach Club. I’m not sure if it was ever put under the Curse of the I Give it a Month Twitter thing, but it has succumbed to something and closed…

(‘Looking for a new location’ – like an actor ‘resting’ between roles.) It lasted six months. That’s despite having 79,000 Koreans marching past every day. Or could it be because of them? No-one else can squeeze into the district, and it’s your fault for not selling nasty egg tarts.

And what do we see reflected in the ex-Juhu Beach Club’s window? 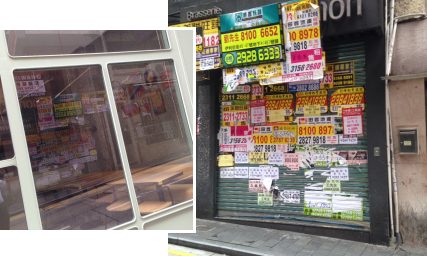 Yes, another vacant shop across the street. That spot used to be the exciting nouveau-Botswanan noodles concept place, before it became the Tasmanian tapas bistro – though after it was the Taiwanese-Swedish fusion theme sports bar.

This was impressively quick. The landlords are licking their lips and sharpening their knives to see who’s stupid enough to come next.