Like a weird finding in quantum physics, Hong Kong’s independence movement should not, in theory, exist. History, existing constitutional arrangements and common sense insist that it is a non-starter and fantasy. Yet groups of (mostly young) people are calling for various degrees of self-rule and city-statehood. Their common theme is separation from the Chinese one-party system, and their ideas extend to exotic and eccentric suggestions for union with Taiwan or restored links with Britain.

Surely, they can’t be serious? The local and Beijing governments’ obvious response would be to ignore this as an irrelevant fringe interest on a par with the local UFO Society. Yet the Chinese regime is so insecure and paranoid that the slightest challenge to its rule (like outsiders commenting on human rights issues) triggers outraged foot-stamping, table-banging hysterics. Hong Kong’s leadership under Chief Executive CY Leung is so subservient that it cannot distance itself, let alone contradict, Beijing’s absurd reactions. In an attempt to appear loyal and onside, Hong Kong officials are echoing the notion that calling for independence is somehow illegal. (More insight on that here.)

At the same time, the Chinese government and its surrogates cannot interpret the independence sentiment as evidence that they have made mistakes in running Hong Kong. The Chinese Communist Party is officially infallible. So if Hong Kong people oppose the government it must be because they were brainwashed by the British from 1842-1997, manipulated by the CIA or other hostile but never-named foreign forces, or – a relatively subtle argument – are too stupid or uninformed to understand the true situation.

This tendency to rely on lame excuses for things going wrong – ‘the dog ate my homework’ – is depressing or amusing, depending on your mood.

CY Leung is now blaming the Legislative Council election system for the independence movement. This is idiotic for several reasons.

First, as critics are rushing to point out, the bizarre proportional representation system for geographical constituencies goes back to the late 1990s. The ‘Hong Kong independence’ meme hardly exists pre-2012 (when colonial flag-waving combined with anti-tourist/smuggler activism), and first played a role in a LegCo poll only in a by-election three months ago.

Second, such a desperate argument draws attention to the role of CY himself and Beijing in alienating Hong Kong through their hostility to local pluralism and values. Even (especially?) pro-establishment figures who dislike CY are casting him as the ‘father’ of the independence movement.

Third, the incomprehensible and convoluted proportional representation election system was imposed by Beijing. Before the handover, directly elected LegCo seats used a plain first-past-the-post system; each district (eg Central and Western) had one representative – and that was whoever won the biggest number of votes. The new regime scrapped this after 1997 because pro-Beijing candidates kept coming second in elections, while pro-democrats won. That’s how we ended up with this arrangement of just five geographical constituencies each with at least half a dozen representatives.

As the number of seats in LegCo has risen, candidates have been able to win with a smaller share of the votes – hence Trotskyist ‘Long-Hair’ Leung Kwok-hung and many others across the spectrum become lawmakers with well under 20% of the vote. Some get in with below 10%.

What CY is saying is that Beijing’s attempt to rig LegCo geographical elections has given rise to the ‘Hong Kong independence’ phenomenon. It is an insult to his beloved Communist Party, and it is factually incorrect. Couldn’t he think of anything better?

On the subject of alienating people, it looks like the Hong Kong Police are under orders to create maximum inconvenience to the public during the impending visit of Zhang Dejiang. As with the pro-independence movement, this would have passed unnoticed if the authorities had treated it as inconsequential. But of course hyping it up has become an end in itself.

The area in Wanchai where Zhang is staying and pronouncing on ‘Belt and Road’ is to become a sort of Baghdad-style Green Zone. Cops were zipping around on bikes all over the area yesterday, and a plot to commit Dastardly Deathly Drone Deeds has been thwarted. Traffic – including that of pedestrians on overhead walkways – will be blocked whenever and wherever his motorcade approaches.

We went through something like this on a few previous visits by Beijing potentates, and a few years ago I was in a tetchy crowd prevented from crossing the IFC-Central footbridge while Connaught Road was emptied before Russia’s Dmitry Medvedev (whaddya mean ‘who?’) and his imperial entourage passed by. It seems the less-important you are, the bigger the fuss they make. Zhang is to be treated with such reverence that the cops have invested in special, brand-new, shiny ‘walkway-closing’ banners, complete with apologies for inconvenience. They are rolled up alongside metal barriers everywhere this morning, waiting to keep you in your place… 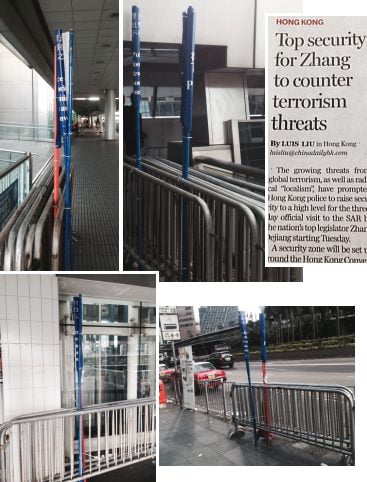