Not content with such anti-riot voodoo as the application of water-soluble glue to brick sidewalks, Hong Kong authorities plan to deploy 6,000 police next week to guard visiting Chinese official Zhang Dejiang. The South China Morning Post describes the effort as the city’s biggest security operation since the Olympics equestrian events, which sounds a bit underwhelming. But what we can expect – they’re already putting barriers everywhere – is maximum inconvenience as the cops block entire roads and overhead pedestrian walkways every time this guy goes somewhere.

The weird thing – if we are to be brutally honest here – is that up until the visit was announced a few weeks ago (or whenever), no-one had pretty much ever heard of him. Zhang is Chairman of the National People’s Congress Standing Committee, the small semi-full-time bit of China’s vast one-week-a-year rubber-stamp legislature. It says here that he’s a Jiang Zemin protégé, which suggests that the current top leadership would distrust him and give him only mundane and stupid jobs to do. And, lo and behold, he is coming here to talk at a conference on Belt and Road Opportunities Blah Blah.

Hong Kong’s chattering classes must read more into it, and so they interpret Zhang’s visit as being in some way connected with the rising tide of Hong Kong independence sentiment. A Beijing think-tank informs us that his mission is a sign of the Central

Government’s ‘care and love’ for the city (cue shiver down spine). Selected pro-democrats struggle to feel excited about the Zhang banquet – lucky invitees RSVP by completing a lengthy application form and affixing a photo.

The extreme security measures could be a convoluted attempt to send a message to CIA-backed fishball-rioting splittists and/or to Beijing’s officials that Hong Kong’s leadership and its big tough police force remain ever-vigilant. Given that Chief Executive CY Leung’s obsessive-compulsive shoe-shining obsequiousness is completely off the scale, the mobilization of thousands of cops for no obvious reason is also possibly just a grand face-giving gesture – his equivalent of, say, a box of chocolates.

The pro-independence movement will presumably not even deign to acknowledge the presence of Zhang in our city-state-to-be. They have better things to do with their genius for trolling, which it must be said becomes more magnificent by the day. One of their number recently proposed a sort of compromise: maybe Hong Kong doesn’t need to be fully independent, he said – it could just be… a US territory. You could hear the blood vessels bursting in Beijing’s Liaison Office.

As for Zhang’s personal safety, I have the perfect solution. All he needs to do is wear a slightly loud-coloured T-shirt and casual slacks and stroll around any street or neighbourhood while chewing a hamburger – I can guarantee that not a single person will even notice him. 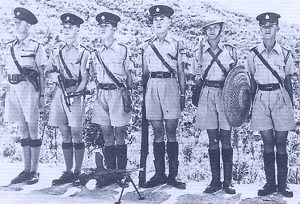