Back in colonial times, according at least to the nostalgic and politically incorrect, Hong Kong’s civil servants were capable visionaries who put the city first in a spirit of effortless, can-do, stiff-upper-lip aplomb. Unlike – you are invited to infer – certain incompetent Beijing-worshiping weasels currently in office, whose names we won’t mention. (And seriously: can you imagine a Leon Lai concert being botched to hell under the Brits? Unthinkable.) 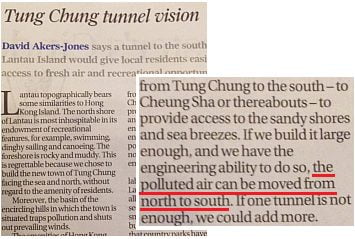 Cynics will immediately smell a rat. The concrete-laying, mall-building, landlord psychopath-parasites of the Tourism Sector are agitating for the whole of south Lantau to be turned into a Spa-Resort-themed Luxury Shop Mega-Attraction Concept Zone Hub with 63 exciting branches of Burberry’s. This sounds like one of their frantic taxpayer-abusing, environment-wrecking little scams.

But let’s give Sir David the benefit of the doubt. He has a (discreet) record of not being hugely impressed by the excesses of Hong Kong’s property cartel. And in his SCMP letter

he actually criticizes previous infrastructure development around Tung Chung for serving the sacred Tourism Sector rather than local residents. He seems genuinely concerned that Tung Chung is a dump.

Most of us are vaguely aware that Tung Chung is, perhaps, less than scintillating. It’s that New Town/suburb that flashes past just before the Airport Express reaches the terminal. It’s where delinquent teenagers from Discovery Bay go for a wild time. It allegedly suffers from air pollution (by the standards of Central, it seems fine). It has a shortage of eating and shopping choices, yet devotes one entire mall to Mainlanders bussed in to buy outdated luxury Designer-Label rejects.

Even so, it’s unclear why Sir David feels a twang of sympathy for Tung Chung in particular. It’s no worse than Tin Shui Wai, Tuen Mun and other far-flung, best-forgotten New Towns – though of course these earlier centres were planned and delivered by his colonial-era colleagues.

Anyway, the proposal… A tunnel to the beach at Cheung Sha. Apparently, this can be so big that people in Cheung Chau will be able to see the sun set through it. More to the point, it will be able to take all the polluted air from Tung Chung down to the aforementioned sandy shoreline.

It is a genius idea. Tung Chung residents who miss the old days of polluted air will be able to hop on the underground high-speed maglev monorail to the southern coast, where they can relive their town’s former smoggy past.

Or they can stay at home, away from the beach, but with clean air.

But wait! There’s more! I declare the long weekend open with a flash of inspiration. If it works in Tung Chung, surely we can have our own tunnel from Central to, say, Australia or somewhere.