All the latest shoe-shining styles 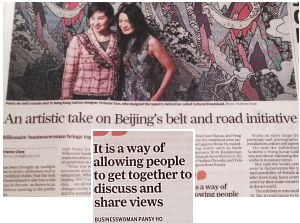 Vivienne Tam – one of few fashion designers I can name, and the only one whose work I might recognize – droops in my, admittedly inconsequential, esteem. She has apparently

sold her creative talent out to ‘billionaire businesswoman’ (aka casino/sleaze heiress) Pansy Ho’s ‘One Belt, One Road’ art exhibition, which is an obviously puke-making attempt to shoe-shine the Chinese government. This is brought to us in an exclusive interview in the South China Morning Post, adding a third layer of shoe-shining to the already-unseemly grovel-fest.

Pushing the ‘Belt and Road’ concept/brand/‘piece of sublime mysticism’ is just one symbolic gesture of loyalty Hong Kong sycophants can offer to the regime in Beijing. Others currently popular include screwing around with student activists’ bank accounts (if you’re a financial institution), being tediously snotty about/refusing to screen the film Ten Years (if you’re in the entertainment business), or blacklisting potential office-holders with pro-democracy leanings (if you’re a university governing body or, now, the Stock Exchange – more here).

(Note that all this United Front groveling entails some cutting off of nose to spite face, or maybe we should say ritual self-flagellation. Cinemas that don’t show Ten Years and boards that turn down first-choice appointees for being pro-dem are all hurting themselves.)

If you are none of the above but want/need to display your obsequiousness to Beijing, there are plenty of memes, shibboleths and official lines-to-take that everyone can spout at every available opportunity. The latest is to vehemently proclaim that Hong Kong independence is impossible.

Someone at the United Front propaganda-spin HQ seems to have issued an advisory that the best way to do this is to point out that an independent Hong Kong could not survive economically (eg Arthur Li asking where our food and water would come from). Presumably, the idea is to talk to the rabble in language they understand (money). But this actually undermines the anti-independence argument, because the city’s economy already operates separately from the Mainland’s. As Singapore shows, political sovereignty and regional/global economic integration co-exist quite happily (to answer Li, you buy your food and water).

If you point this out to an establishment loyalist, he will reply that we depend on Mainland contributions to our economy like tourists (yeah, sure) or listings on our stock market. This goes back to the grand post-2003 myth about how we need economic ‘gifts’ from Beijing, the aim being to encourage fear and obedience. With China’s economy slowing, it should be more obvious than ever that cross-border trade and investment takes place for profit, not charity. (Check the mark-up on Guangdong’s water.)

Mr Establishment Loyalist will then respond by suggesting that Beijing would deliberately divert listings and other deals away from Hong Kong as some sort of revenge. This is tantamount to saying that the Communist Party is a bunch of vindictive thugs and sounds like the best reason for independence yet.

If the propagandists were smart, they would push a different official line. “Of course Hong Kong could survive independently as an economy, but it’s totally irrelevant: the constitution simply does not and will not allow for it.” This is honest, and credible. Perversely, a pro-Beijing shoe-shiner stating this would have his wrist slapped for going off-message. And so the utterly beside-the-point and unthinkable – Hong Kong independence – is actually discussed by both sides in terms that imply it is some sort of semi-realistic option.

OK, so Ms Popova – pastels, Matisse-ish, perhaps not worth a detour… 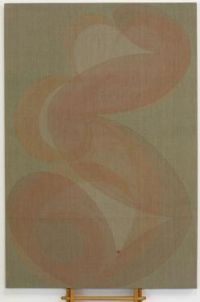 15 Responses to All the latest shoe-shining styles