Is anyone nostalgic for early-/mid-2015 – those days of contrived ranting and rage against the Occupy/Umbrella movement for wrecking the Hong Kong economy (even though the GDP stats had ticked along as if nothing had happened)? If so, they should have been at the Sing Tao News-sponsored HK Leaders of the Year awards on Friday.

Sing Tao boss Charles Ho used the occasion to dust off last year’s official Beijing-approved diatribe against unpatriotic radical lawbreaking protesters, mentioning several of the movement’s leading figures by name. Benny Tai, Joshua Wong, Alan Leong – all more or less well-known and, in the case of the boy Joshua, a global star worthy of the front page of Time. They and their companions are still making news today, with Scholarism and the Civic Party both recently announcing plans for future anti-establishment awkwardness.

Ho’s remarks are an exquisite example of the Hong Kong elite’s unique style of gratuitous, frantic and embarrassing shoe-shining – ritualized self-humiliation as a means to prove loyalty… 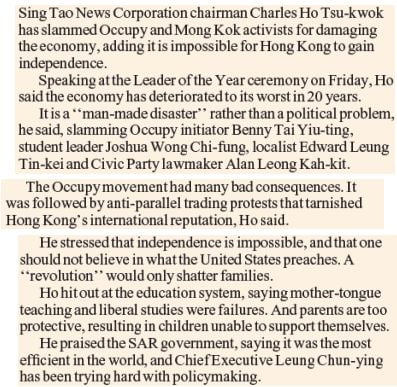 Even Chief Executive CY Leung must have blushed as Ho took a swipe against spoilt kids being unable to support themselves. If I had inherited a tobacco monopoly from my father, I’d have left that bit out.

So having trashed Hong Kong’s heroes of civic consciousness, Ho hands out the awards for Leaders of the Year. The judges are predictable pro-establishment types, including Professor Arthur Li, installed by the government on HK University’s Council to root out such enemies of the Chinese Communist Party on campus as the aforementioned Benny Tai. The ‘Leaders’, by contrast, are people of whom we have never heard.

This is not necessarily because they are worthless nonentities, but because in Hong Kong scions of tobacco monopolies, property cartels and banking empires are far more important than people who use their own talent to accomplish anything socially useful. (By ‘more important’ we mean ‘richer and more desperate to grovel to the Communist Party’.)

One of the Leaders of the Year is HKU Professor Vivian Yam Wing-wah, who’s into LED-type research. Another is Chinese U Professor Emily Chan Ying-yan, who has worked on humanitarian missions. Then there’s Yeung Kin-man, ‘king of touchscreens’. He gets an extra big pat on the head for being the richest person in Hong Kong who is not part of the property cartel/pyramid scheme…

Could this be the same property cartel that has crushed the innovation and entrepreneurship out of Hong Kong? Yes it could. The ‘Leaders of the Year Awards’ do not do irony.

The remaining two winners are Ng On-yee and Wu Siu-hong, champions in snooker and bowling. How can they be ‘leaders’ when these are not even team sports? Indeed, not even sports, but pastimes on a par with Monopoly or Dungeons & Dragons? No matter. The organizers had to find some youngsters, and with the rest of Hong Kong kids joining the Fishball Revolution or launching Scholarism Mk 2, the closest we could get to ‘wholesome’ were in the snooker hall.

17 Responses to Acceptable ‘leaders’ found in the snooker hall