Communist-Stooge Lady stands down from Pointless Rubber-Stamp ‘Advisory’ Board, gets replaced by Old Communist-Stooge Loser Guy. After some news-room debate, the South China Morning Post uses the word ‘bombshell’ to describe the departure of the DAB’s Starry Lee from Hong Kong’s Executive Council, complete with picture emphasizing her sultry gravitas (or something). It was a slow day.

The search for the deep hidden meaning begins, and before long we are inundated with chatter about Starry preparing to run for Chief Executive. Yet, as the chatterers themselves soon conclude, the idea is meaningless. People don’t ‘run’ for CE; they are essentially ‘tapped’ by Beijing. And as the Standard’s editorial delicately points out, a Politburo of ‘doddery old men’ won’t succumb to Starry’s youthful feminine charms. Starry is simply the figurehead of the Communist Party’s local front. She was selected for her un-gruesome style and manner compared with most members of the DAB/FTU milieu. She reads out whatever script the Beijing officials give her; she has no known position on, say, education reform, no image as a leader.

After the initial excitement gave way to the cold reality, it seems the SCMP was left with a page to fill about the Sexy Glamorous Next CE, who on reflection actually won’t be…

The paper accuses her of being an ‘accountant’ – one of the vilest slurs known to civilized human discourse. And then it says she ‘almost lacks personality’, which damningly implies the worst kind of forgettable blandness, since people with a total lack of personality have a certain curiosity value.

If we must try to find meaning in the ‘Starry leaves ExCo’ story, it is that Beijing wants the DAB to shore up its vote in September’s Legislative Council elections. If this means symbolically distancing itself a bit from Chief Executive CY Leung, so be it – the people have some say in the composition of the legislature, while only the Communist Party picks the CE.

This is also a reminder of the meaninglessness of the Executive Council, on which DAB elder and non-un-gruesome Ip Kwok-him will now sit. Officially, ExCo advises on policy, but it is pretty much a local CPPCC. Membership is a pat on the head for obedience (and actually a curse, as it comes with a requirement of loyalty). It is also a lame attempt to represent the administration’s inclusiveness, with one token ‘pan-dem’, one ‘rural mafia’, one ‘youth type’, one ‘techie guy’, etc. And, of course, one ‘DAB loser’. To the extent Ip will have a higher profile, he will be useful to the pan-dems as a reminder of the hilarious LegCo disaster when the pro-Beijing members did their lobotomized-sheep thing and all marched out on the political reform vote.

I declare the weekend open with other only-in-HK political news: Lovable Mop-top Scamp Crafts Party Strategy and Mulls Plans for New Nation-State, Despite Being Too Young Personally to Be Elected… 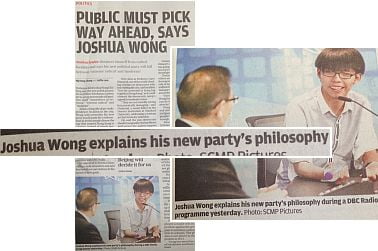