All sorts of impending doom going on right now.

An international survey shows that Hong Kong has the world’s least-affordable housing. China’s state media reveals Beijing’s nervousness by lamely warning George Soros and others that ‘vicious shorting’ of the Yuan will hurt only the speculators. Hong Kong students brave the cold and angrily protest the Chinese Communist Party’s vindictive micro-meddling in the University’s internal affairs. The causes of such discontent in Hong Kong range from bad governance – issues like housing – to Beijing’s broader assaults on local freedom, such as the abduction of the five book-sellers. In the background is China’s overall clampdown on human rights. And on that note, an anonymous HSBC source tells Reuters that the apparent weakening of Hong Kong’s autonomy is one reason to stay domiciled in London. 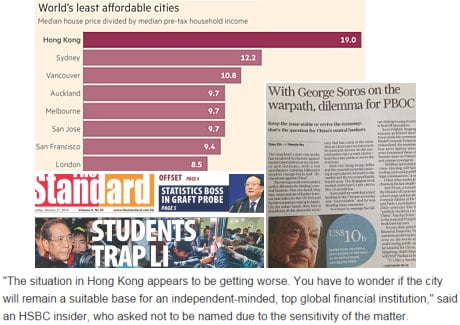 “The situation in Hong Kong appears to be getting worse. You have to wonder if the city will remain a suitable base for an independent-minded, top global financial institution,” said an HSBC insider, who asked not to be named due to the sensitivity of the matter.

There was a time, maybe up to a year or so ago, when HSBC appeared to be angling for

some sort of tax or other sweetener to lure it ‘home’. Now, it seems, Hong Kong is unfit for multinationals’ HQs and – if it has to choose between the two – would rather host China’s kidnappers of publishers. (And CNN can go, too, if they don’t like it.)

A good summary of China’s clampdown appears here. In a nutshell: China’s looming economic crisis threatens the healthy development of Xi Jinping’s personality cult, but the Western world’s cowardice and hypocrisy over human rights come to the rescue.

On the face of it, speculators who see the Hong Kong Dollar as a proxy for the Yuan are misinformed. But this isn’t about the technicalities of currency arrangements – it’s psychology. Just the threat of attacks on either currency will increase jitters in the city about what is already obviously a bursting property bubble. We are now hearing real-estate agents pleading for cuts in stamp duty to prop up prices, and this is just the beginning of the squealing.

Compared with China’s lapse into economic gloom and dictatorship, Hong Kong’s housing may seem a sideshow. But nothing disorientates Hong Kong like declining property prices: the reversal of ever-rising asset values and landlords’ pricing power is like a Jacobin overthrow of the natural order. The people who gain are non-owners of property – serfs of no consequence in the city’s political system – so the government and its supporters (facing legislative elections in September) can only lose as the bubble deflates.

That means a more fevered and panicky climate, an administration under even greater siege, all the more seething and anger from the people – and in response yet more paranoia and brutishness from the Communist Party’s henchmen on this side of the border, where the world can see it up close.

6 Responses to HK property to add to overall mayhem