Two years ago, the Hong Kong government set up the Lantau Development Advisory

Committee. The body represents landlord and construction interests that have been lobbying for some years to smother Hong Kong’s largest island with concrete, nasty attractions and Mainland tourists. It has now submitted its first Work Report, titled Let’s Wreck the Countryside so Our Buddies Can Make a Ton of Money.

The lobby’s premise is that Lantau has a large amount of unused available space, which can be used for tacky tourist theme-concept zone hubs. This is a two-edged sword for the government. On the one hand, officials naturally favour anything to do with concrete-smothering and swamping-by-Mainlanders, especially if it helps find a purpose for such white-elephant projects as the Zhuhai mega-bridge. On the other hand, the ‘spare space’ idea contradicts the Hong Kong government’s official line that we have a dire shortage of land, which of course means we cannot have affordable housing.

A further complication is the obsessive-compulsive nature of the parasitical ‘tourism’ industry. The more Mainland mass-tourism makes Hong Kong uninteresting or unpleasant to visit (let alone live in), the more the tourism lobby screeches for more of the same tawdry crap attractions and facilities in the hope of cramming ever-larger numbers of the bewildered peasant shopper-wretches into the city.

Needless to say, public opinion comes bottom of the list of priorities for decision-makers. It will, of course, be hostile.

The report goes beyond visionary to grandiose and probably absurd. It proposes everything from pitiful and desperate-sounding tourist attractions (spas, for heaven’s sake) to entire new islands to be reclaimed east of Peng Chau. It all comes with lots of ‘connectivity’, ‘nodes’ and ‘corridors’. 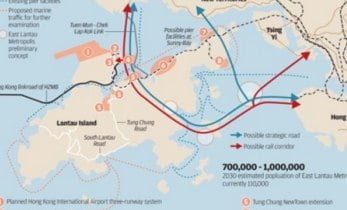 Reasons to assume this is not intended to be taken seriously are two-fold. First, the full report is (so far) in Chinese only. This tends to indicate a document designed to appease particular, parochial, audiences – often Mainland officials, but in this case probably local landowners and other small-medium commercial interests. Second, the maps are crammed suspiciously full of arrows and oval-shaped zones. This superficially suggests impressive and intensive strategizing; the PLA’s plans to invade Taiwan aren’t this busy-looking. But on closer inspection the symbols denote vacuous nothings like ‘ecology’ and ‘heritage’. You can imagine a young civil servant drawing more and more of them on an overlay while the grubbier Committee members look on and salivate.

So this is partly aimed at placating the usual New Territories mafia. But there is surely also an element of managing public expectations for the long term. The lobby to exploit the island includes big and international corporate interests (tourism, airport, engineering, retail, etc). They are smart – pitching development of the region as a means to meet local people’s housing needs, claiming to have great concern for the job prospects of the poor ragamuffins of Tung Chung’s public housing estates, and co-opting community groups. The trick will be to bundle things Hong Kong people need like homes with the tourist crap they don’t want.

All of today’s pix are worth clicking on…