A tale of the screw-ups of two cities 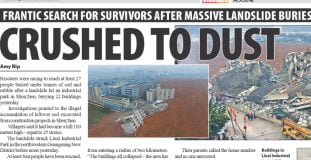 Just before putting the light out last night, I did my usual news-junky thing and checked to see if anything major had happened in the preceding 25 minutes. The Latest-Mayhem Updates website mentioned some sort of landslide in Shenzhen, complete with a grainy shot of red mud piled up against a half-buried building. 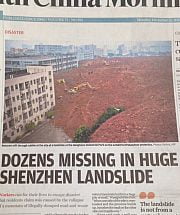 torrent of mud flowing onto industrial buildings, including dorms. Estimates of the missing include 59, 91, and other unverifiable numbers that conveniently fall sort of three digits. Videos show one sizable building giving way, and the aftermath of many others, plus a broken gas pipeline.

The South China Morning Post quotes a Shenzhen engineering expert as placing at least some blame on the soil in South China, which is ‘wetter and less cohesive’. The paper also quotes a city Communist Party boss as reporting that some 900 people fled buildings before they were hit – suggesting that this ‘wetter and less cohesive’ mud at least moves slowly and loudly enough to give plenty of warning.

The SCMP mentions that the ‘landslide’ covered 100,000 square metres, and the soil-dumping had been going on for two years, prompting complaints from residents. It was of course as illegal as it was hard-to-hide. As with the Tianjin explosion a few months ago, this will 99% vanish from memory within a week or so. (And hey kids, Allen says Shenzhen has become China’s Silicon Valley!)

In Hong Kong, it’s the buildings that hit the rocks, rather than the other way round, and the reason is ‘wetter and less cohesive’ policymakers and planners. The Standard contributes to seasonal cheer by not putting some of its articles online today, so you’ll have to read the editorial ‘Cultural hesitance on elderly flats’ on the cool page-flipping feature on the home page (page 8).

The story is that with two days to go, the Housing Society has received only 248 applications for the 600 units at the Tanner Hill development. (The project offers wealthy elderly an apartment for life, the price based on age.) Leaving aside lurking fears to do with moral hazard – the Housing Authority has an interest in residents’ expiring sooner rather than later – this rental model is unlikely to appeal to Hongkongers because ownership of the unit reverts to the Society upon death. To the elderly, and more to the point their kids, this goes against the instinct to preserve family wealth.

The Standard frames this in more culturally positive terms. Shoving the old folks away in a retirement home is a nasty Western thing, while the Chinese, imbued with Confucian ethics of filial piety, absolutely adore having their ancient relatives living with them…

Nothing much on the possibility that, either way, the Housing Society goofed up. And no suggestion that the non-profit Society might have better things to do than dream up contrived concepts for subsidized (or at-cost, or death-lottery-style) accommodation for the rich.

Meanwhile, illegal and often dangerous subdivided hovels housing some of the city’s poorest have become the priciest living space per square foot.

Activists demand emergency housing, using unused government blocks and empty school premises – options officials hate on grounds of setting precedents (allowing Hong Kong people access to their own space) and, we might guess, requiring way too much paperwork and admin. In addition, of course, there will now be 352 spacious and vacant unite at Tanner Hill.