‘…bring a world of endless possibilities’.

Could this be the slogan of a residential real-estate project – perhaps the Yuccie in glamorous exurban Yuen Long? Is it a pithy quote from a best-selling self-help book? Is it the blurb of a loan-sharking business?

Hong Kong’s housing market seems to be the product of an innovative dream – a parallel universe in which Stein’s Law does not apply. Now, after dragging it out for three (four, five) years, the Federal Reserve’s Janet Yellen is finally going to tweak interest rates up by a microscopic degree. The slower and duller 95% of the property herd will (surely) pick up on the recent falls in transactions and rents, which ultimately must reflect the pre-emptive retreat of their nimbler and smarter peers.

One of many signs that change is in the air is that real-estate agents are losing it. Some, like starved cornered rats, are attacking MTR staff in broad daylight. Others are fantasizing about more price rises, possibly with occasional modest and fleeting corrections that can laughed off. One writing in the South China Morning Post insists that the downside is trifling because (alongside other dreamy reasoning)…

…the likelihood of a dramatic fall off following 2015’s all-time high seems unlikely, as excess liquidity throughout the global economy, without any oversupply and with construction costs remaining high, will prevent a drastic decline of 30 per cent to 40 per cent in prices.

As we have seen in the past, ‘oversupply’ is just another way of saying ‘too little demand’,

and it sometimes just appears when you don’t expect it. But the really exquisite delusion here is the comment about construction costs (which, like that of land, have been over-inflated in recent years). She assumes that the cost of production sets a magic unbreakable price floor. It might work with FairTrade coffee, but otherwise it isn’t so. If someone charged you HK$5 million to build an apartment, but no-one will pay you more than HK$4.9 million to buy it, you screwed up.

Are the ‘innovative dreams’ anything to do with a self-help book? Hong Kong’s Education Secretary Eddie Ng has been regaling his adoring public with tales of his lightning-fast reading skills. The man claims to be able to finish 10 books in a 10-hour flight, and polish off a couple of magazines while dining.

Of course, many Hong Kong people, traumatized by their school experiences, see reading books as a painful past necessity, and the idea of doing it in adulthood is as peculiar as, say, having root canals done as a hobby. But those of us brought up in more literary surroundings need to know just one thing: exactly what is Eddie reading? And this brings us to self-help books, as it seems Eddie has perused one 7 Habits of Highly Effective People, seen at airport bookstalls everywhere.

This guy says, quite rightly, that people who read self-help books should be killed. Eddie is certainly not a great advertisement for the genre, though he would do credit to the impact of 7 Habits of Complete Bumbling Idiots. Maybe he hopes that by divulging his voracious consumption of the printed word, he will somehow induce admiration, or perhaps pity, among the legions of parents who detest his Bureau’s arrogant dismissal of their concerns. Or maybe this is an attempt to shoe-shine his boss and the boss’s bosses up in Beijing. He says he reads China Today – an old proto-soft-power propaganda sheet with roots in the 1950 and 60s, when gullible Mao-loving foreigners would lap up tales of peasant doctors using acupuncture to perform open-heart surgery. No-one has read it (or even recalled that it existed) for a couple of decades.

As any sentient being will have guessed by now, the ‘Innovative dreams bringing a world of endless possibilities’ motto is that of a loan-sharking operation. Rumbling noises deep within the property market and the Education Secretary’s claim to super-human powers point to a something strange happening in the world. But we know the end times are upon us when Macau’s ‘junket’ groups are in a downward spiral. (As you can tell from the slick and tasteful website, this is one of the classier of the breed.)

According to Bloomberg, the lenders are collecting just 20-30% of their debts, individuals have apparently absconded with sums like HK$100 million or HK$10 billion, and minor details – like the impossibility of legally pursuing delinquent borrowers in the Mainland – are becoming a hindrance. The industry is…

…trying to come up with creative solutions, including packaging bad debts and distressed assets and selling them to third-party financial investors at a discount…

I declare the weekend open with a big Thank You to the wit who signed me up to the email edition of HK Golfer – which at least gives us another opportunity to hear from the master. 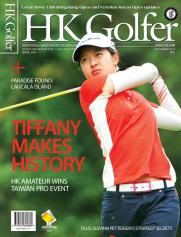 I suppose it could have been China Today.