An eye-catching headline can lead us to read even the most humdrum article, which is how I end up skimming through a South China Morning Post piece titled ‘Stop Groveling to Racially Inferior White Dogs Scum Right Now’. Columnist Yonden Lhatoo apparently specializes in writing provocative, edgy stuff about how Hong Kong gives Westerners privileged treatment, for which gullible readers shower him with praise or abuse, presumably along ethnic lines.

I would have thought that discrimination against certain groups in Hong Kong, like Southeast Asians and indeed people of Himalayan extraction, is at least as much of a problem. And let’s not get started on the spectrum of bigotry that restricts top positions in education, legal, financial and other government bureaus to people who are not simply Han Chinese but cretins. Anyway, his complaints sound a bit 1990s. White kids get picked

for school sports teams, he reports, and – you saw this coming – gwailos get all the girls.

It’s all anecdotal, but assuming these things happen, the obvious next step is to ask why. We are told it is simply blind ‘worshiping’ of people with particular skin pigmentation.

The amazing thing: he’s right. A quick flick through the rest of the paper reveals numerous (well, two) examples of blatant and clearly unwarranted favouritism towards white people – in the form of page-space and publicity for views of dubious value.

First, jovial ex-bureaucrat Mike Rowse takes 500 words to say ‘I’m overweight but adjust’. In fairness, the item contains some amusing imagery – blubber rolling around in search of its toenails. But would a Mike Chan or a Mike Wong have been given these column inches to play with in this way? I think not.

Second, landlord Allen Zeman disagrees with Chief Executive CY Leung about some abstruse Chinese Communist Party terminology. At some drug-crazed gathering yesterday, CY said that Hong Kong ‘needs to know more about the 60 countries’ arrayed along the glorious Maritime, Silk, One Belt, One Road Blah-Blah Strategy Thing, and our city will do some sort of conducting and connecting. And Zeman leaps up wagging his finger in outrage (maybe) and proclaims that, on the contrary, China and only China is the Super-Connector.

Since China Daily has already acclaimed Hong Kong’s ‘unique role as a Super-Connector’, and CY himself said the same thing to Edi the Prime Minister of Albania just a couple of days ago, I think we can safely conclude that Zeman is talking piffle. Were he Allen Tsang or Allen Hui, the SCMP editors would cut his inanities out of the story in a second. But being the ramblings of a precious whitey, they appear.

I declare the weekend equally open for all. 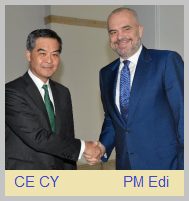 You guys are one of the 60 countries, right?

(This poor guy – he comes all the way from Albania, and all he gets is ‘super-connector, rich pool of talent, please invest here’ hogwash. Just take him out for some noodles or something…)