At least the weather has cooled down a bit

After a week in low-cost, spacious and mostly relaxing Taiwan, I am sorting through

photos. Highlight of the trip was a visit to a remote head-hunting, cannibal tribe in a mountain aboriginal reservation, which raised interesting questions about the authenticity of heritage – more of which later.

The trip started at Hong Kong Airport, where some Thai foodstuffs company is sponsoring this intriguing twist on Asian culture… 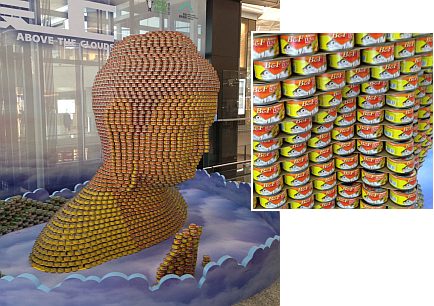 …a Buddha made of cans of tuna. Tasteful and tasty. Next month, the terminal will feature a statue of the prophet Mohammed made of bacon.

I return to find Hong Kong getting itself deeper into all-out civil warfare, in which everything from heritage to the carrying of cellos on trains to university appointments triggers conflict between the two factions.

The plan to cover royal insignia on old mailboxes has predictably provoked a backlash. If the idea (to ‘avoid confusion’) were the work of nativist subversives within the Post Office, it couldn’t be more effective. Mischievous localist wits are now putting stickers of colonial symbols onto the boxes, which would otherwise have stood silently and unnoticed at the street-side, as they have for decades. (Who even sends letters these days?) To add to the weirdness, the pro-Beijing shoe-shiners within the parasitical tourism industry find themselves awkwardly in favour of keeping the royal symbols, on the (debatable and probably desperate) grounds that such features are a magnet for visitors to the city.

The MTR is also getting caught up in the tangled web of Mainlandization and Hong Kong’s broader internal strife. In the good old days, passengers could carry large musical instruments on the trains with no fuss. Then the combined forces of darkness in the tourism lobby and the Chinese Communist Party decided to swamp Hong Kong with unmanageable numbers of cross-border shoppers, whose outsized baggage irritated the hell out of everyone. In response to popular demand, the MTR took action against such baggage – but apparently focused on young local musicians rather than the tougher targets represented by the smugglers, whose activities benefit organized criminal groups. Like the mailbox thing, it is a gift to the pro-Hong Kong/freedom camp. As with the Post Office (and the police), the previously popular and admired MTR finds itself on the side of Communist evil, loathed by all right-minded, freedom-loving people.

Universities, as institutions dedicated to independent thought and inquiry, are inevitably battlegrounds in Hong Kong’s cultural/civil struggle. The Johannes Chan non-appointment at Hong Kong U sets a precedent for a political test in academia. Given the Chinese Communist Party’s mystical, faith-requiring, autocratic/divine nature, we can see it as a religious test. (Though the CCP also attracts adherents by offering rewards in this world. Which leads us to note that anti-Chan HKU council member Arthur Li has just increased his stake in the family business, Bank of East Asia, which has extensive Mainland interests.)

The government’s latest appointments to Lingnan University’s council are decidedly pro-Beijing. Defensive and whiny pro-democrats complain about favouritism and describe the appointments as ‘rewards’ for loyalty and obsequiousness to the CCP’s local cause. This is the wrong way of looking at it. A box of chocolates, air miles or a handout of cash are ‘rewards’; a seat on a public advisory body alongside government puppets is a pain in the backside. What we are seeing here seems to be an extension and tightening of the religious test. Beijing is seeking to exclude an even larger portion of the critical and dissenting population from public affairs. By definition, that means a smaller pool of talent to draw on. The quality of people in certain academic positions, on public bodies and wherever else this happens must go further down from now on.

From a Hong Kong-centric point of view, this is Beijing’s revenge for the Occupy-Umbrella movement. Looking at the big picture, Hong Kong is alongside Tibet, Xinjiang, churches, NGOs, financial markets, the South China Sea, the Internet, multilateral trade agreements, infrastructure deals, resources, the Arctic, overseas Chinese, and of course Taiwan, and much, much more: one minor arena in the Chinese Communist Party’s paranoiac global struggle for survival.