Li’s strategy – after raking in easy profits from Hong Kong’s cartelized domestic economy – has long been to buy cash-generating assets at the right time. It means spotting global trends early and thinking on a timescale of decades. A classic move was to buy stakes in 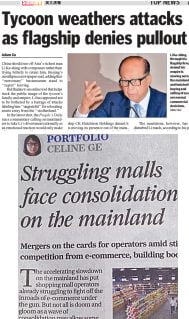 container ports around the world just as the massive 1990s-2000s expansion in international trade was about to take off. Another was to develop major commercial real-estate projects in top-tier Mainland cities just as China was entering its huge (related) boom.

A key part of the strategy is to sell the assets as the global trends are peaking, and move into the next big, undervalued, thing. In recent years, Li’s empire has been reducing its exposure to real estate in exciting, sexy, booming China and acquiring utilities and infrastructure in tired, drab Western countries. This repositioning is based on a simple calculation: China’s easy, fast growth is over, while Euro-zone disasters like Greece can only rebound – if you can think 10 years out. Time will tell, but growing signs of problems in the Chinese economy suggest the timing looks pretty good.

To certain Chinese officials and nationalistic public opinion, the coldness of this strategy comes across as ungrateful and unpatriotic. The act of selling assets should make no difference to China’s economy or people: no-one suffers if Li ‘moves investments out of the country’. Other companies take over the shopping malls, ports or whatever. But we can see reasons for resentment.

First, there is the perception that Li benefited from personal connections and influence. The famous example is the eviction of a McDonalds to make way for the Oriental Plaza project in Beijing (in which future Hong Kong Chief Executive CH Tung’s family also had an interest). Conversely, Li has donated fortunes to education and other good works in the Mainland. There seems to be an instinctive belief in the Mainland that emotions like patriotism, blood ties or mutual

obligation should override commercial logic or market forces – consider Beijing’s orders to businesses and investors to prop up stock prices. For amusement, we could trace the origins of this attitude to feudal and/or Communist thinking, and maybe even the warped notions of ‘fairness’ arising from the China-victimhood fetish. The sourness of the People’s Daily quote about making Li ‘regret’ is thin-skinned, truculent CCP childishness at its finest.

Most of all, however, Li’s business-as-usual moves are inadvertently delivering a highly unwelcome, politically incorrect message: the Chinese economy has finally jumped the shark.

The Standard manages to turn the story into a shoe-shining opportunity in which Li is praised for the magnificence of his corporate PR team’s space-age reputation-management technology.

Meanwhile – if only Hong Kong bureaucrats could keep up with Li Ka-shing. In the 1990s, when the Pearl River Delta sweatshop export manufacturing powerhouse thing was taking off, it could have made sense to link Hong Kong with the western part of its hinterland. It would have given factory owners new room to expand, and enabled lots of lovely trucks to bring tons of cheap plastic goodies over to Hong Kong’s port for shipping to global markets. Today, the idea is redundant. Yet they are working on the thing, and it seems the reclamation is being rushed and it’s turning into yet another multi-billion screw-up. The good news: ‘the sea wall is not expected to fail but it may not keep the correct shape.’ (Update: more here.)