Another week, another outburst of incomprehensible blather from some Mainland ogre seething at Hong Kong’s refusal or inability to believe and behave in the (unspecified) correct way.

This time, it’s former official Chen Zuoer. He is mightily miffed over the city’s failure to de-colonize and its perverse revival of de-sinicization (which is apparently rampaging around us as we speak). Such travesties of history, he maintains, are the cause of our economic woes and social strife. His key point is ‘things 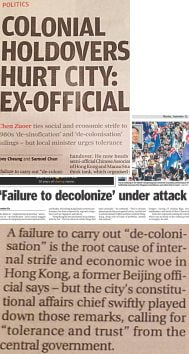 Some might guess he is talking about young people waving British flags. This admittedly weird phenomenon is a protest against bad governance and apparent threats to Hong Kong’s cherished non-Communist values and non-Mainland character. It is a reaction to Beijing’s own policies towards Hong Kong, and Chen would be better off complaining to the relevant organs up there.

Others think he might be endorsing the idea that Hong Kong ditch its colonial-era positive non-interventionism and adopt more Singapore-style economic planning. Does this mean more Disneylands? More billions wasted on pointless infrastructure white elephants? More state-owned enterprises using Hong Kong as a base for the greater East Asia ‘One Belt One Road’ co-prosperity sphere project, or cultural tentacle-creep like the Communist-Warner Tentpole thing?

He did not elaborate. By comparing us unfavourably with Macau and Singapore, he could be advising Hong Kong’s people to be more docile, in which case he may be disappointed. Or he could be encouraging our policymakers to focus ever more blindly on GDP growth as an end in itself by cramming more and more tourists and guest-workers in, in which case he is preaching to the converted.

All we can be sure of is that Chen has malice towards Hong Kong in his heart. Even the city’s Secretary for Constitutional and Mainland Affairs Raymond Tam, who should in theory heap groveling praise on such Beijing ranting, tells him to be ‘more tolerant and trusting’, which in patriotic shoe-shining terms pretty much means ‘shut the hell up’. Obviously, Tam would be more civil if Chen were still a serving official with the Hong Kong and Macau Affairs Office. But it seems at least some people in the Hong Kong government recognize that the barrage of Beijing bluster is counterproductive. Unfortunately, Chinese officials have a limited range of social skills when offended by a refusal to kowtow: mouth-frothing table-banging freaking-out is pretty much it.

On a lighter note, along with a massively heavy glossy supplement about ‘Mice’, today’s South China Morning Post comes in a wraparound promoting a company called Brunello-something, which apparently sells furry boots – essential in Hong Kong in September…