Milking things for all they’re worth

Separation-of-Powers-Gate, or Zhang-Gate for short, continues to send shockwaves through Hong Kong.

To recap: China’s top man in the city, Zhang Xiaoming, announces that separation of powers does not apply there, and that the Chief Executive occupies an elevated position above all 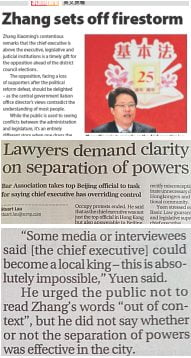 three branches of government. This provokes a predictable backlash from lawyers and opposition politicians. Now, just as predictably, local officials and pro-Beijing figures scramble to ‘explain’ that Zhang did not mean what he said, and Justice Secretary Rimsky Yuen pleads with detractors not to quote the remarks out of context or exaggerate them.

This is a bit rich. For the last year and half, the Liaison Office, Communist-run media, obedient officials and slimy shoe-shiners have been quoting out of context and exaggerating anything that comes their way in order to smear the opposition. The elaborate campaign of lies that Occupy Central ‘damaged’ Hong Kong’s economy and reputation. The phony public opinion polls and signature campaigns. The allegations of links between pro-democrats like Benny Tai or Jimmy Lai and the CIA, and of sleazy handling of donations by academic Johannes Chan. And all the rest. It’s hard to feel sympathy for Rimsky on his knees begging pro-dems not to milk this latest Communist-foot-in-frothing-mouth episode for all it’s worth.

With perfect timing, the Hong Kong Police are caught doing a cover-up (‘rewrite’ in quotes of coyness in the South China Morning Post) of history in its website’s record of the events of 1967. (Details and a before-and-after comparison of the text here.)

The basic history is well known: local Communist elements commited bombings and other deadly acts of terror in the city. The background tends to be downplayed a bit: labour unrest; and the Cultural Revolution, which convinced local leftists to fear persecution for not using violence against the colonial regime. The outcome: an opportunity for that regime to milk Communist screw-ups on a scale we can only dream of today. Thus the loyalty and bravery of the police and population in the face of the Communist threat passed into Hong Kong folklore.

The Hong Kong Police website now omits any mention of Communists, giving the impression that ‘misplaced nationalism’ triggered the mayhem that left over 50 dead. Creepy – but in a way you’re surprised the cops hadn’t fixed this patriotically inconvenient wep page already. Maybe Zhang Xiaoming had given them a call. Of course, side-by-side comparisons of the pre- and post-correction texts are now going to be online everywhere.

But not creepy enough for the Standard, which offers all you need know about the feng-shui of corpse-removal. We learn the difference between between a good-fortune ‘dry’ corpse and the ‘wet’ sort (which is ‘less lucky’, which I presume means the departed is more inclined to come back and haunt you). Plus how to tell parents’ bones apart. It concludes with a mysterious, almost chilling, request from resident geomancer Kerby Kuek for Facebook ‘likes’… 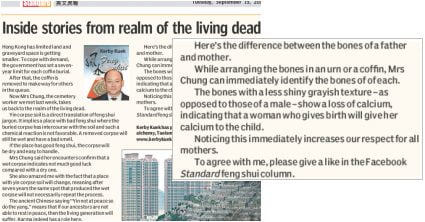 10 Responses to Milking things for all they’re worth